Russia and Ukraine “have almost reached an agreement” on four critical points of a potential peace agreement, Turkey’s foreign minister said, as fierce fighting continued to devastate the key port city of Mariupol.

Mevlut Cavusoglu told Turkey’s pro-government Hurriyet newspaper that there was a growing “convergence” between Moscow and Kyiv after a bout of intense diplomacy over the past week.

“On important subjects, critical subjects, there is a convergence between the two sides,” Cavusoglu said. “Especially on the first four points we see that they have almost reached an agreement.”

A possible agreement would require Russia to announce a ceasefire and withdraw its troops from Ukrainian territory to the positions they had been in when President Vladimir Putin launched a full-blown invasion of Ukraine on February 24.

Some issues would need to be agreed between Putin and Ukraine’s President Volodymyr Zelensky, Cavusoglu said, adding that the two leaders did not appear to have a “negative stance” on that idea in principle.

But Ukraine and its western allies are skeptical of Russia’s motives in negotiating a deal and fear Putin could be buying time to replenish Moscow’s forces and launch a new offensive.

Speaking to CNN on Sunday, Zelensky said talks were worth pursuing even if they had a “1 per cent chance of success” and warned that a failure of negotiations would risk a “third world war”.

“Russian forces have come to exterminate us, kill us. We have demonstrated the dignity of our people and our army, that we are able to strike back, ”he said. “But unfortunately our dignity is not going to preserve lives. So I think that we have to use any format, any chance, in order to have the possibility of negotiating. ”

Linda Thomas-Greenfield, US ambassador to the UN, accused Russia of failing to fully participate in the talks. “The negotiations seem to be one-sided,” she said. “The Russians have not leaned into any possibility for a negotiated and diplomatic solution.”

Podolyak’s statement was the first confirmation from Ukraine that the Kremlin had deployed the missiles in combat for the first time this week.

Moscow claims it used the Kinzhal, which Russia says can travel at 10 times the speed of sound, twice in the past three days to destroy a fuel depot near Mykolayiv, a key city on the front in southern Ukraine, as well as to target a ammunition storage facility in the country west.

Turkey, which is mediating in talks alongside Israel, said Ukraine and Russia had made significant progress on Kyiv declaring neutrality and abandoning its drive for NATO membership, “demilitarizing” Ukraine in exchange for collective security guarantees, what Russia calls “denazification”, and lifting restrictions on the use of Russian in Ukraine. 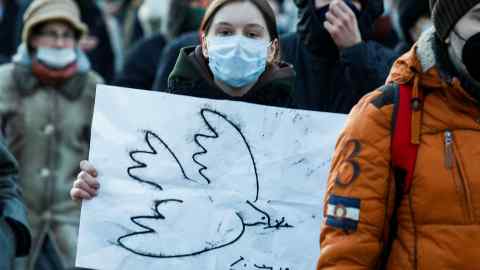 Even as negotiations progressed, Russian forces continued their intense assault of Mariupol in eastern Ukraine, whose status is a key sticking point in the talks, according to two people briefed on them.

Ukraine’s armed forces said on Sunday that “the situation in Mariupol is difficult: there is a family in the city, street fights, people are trying to leave the city on their own.” The Russian forces have cut off electricity, heat, and food supplies.

Anna Romanenko, a local journalist who has evacuated from Mariupol but is still in contact with sources there, said there was heavy fighting in the center, with Russian tanks and armored personnel carriers being attacked by Ukrainian government troops in and around Theater Square, a prominent landmark.

“The front now runs straight through the city,” she said. Large parts of Mariupol, especially the left-bank district and some neighborhoods in the north-west of the city, were fully in Russian hands, she said.

Russia is publicly sticking to the maximalist demands Putin made in the first days of the invasion, including vaguely defined calls to “demilitarize” and “denazify” Ukraine.

Moscow also wants Kyiv to recognize its annexation of Crimea in 2014 and the independence of two Russia-backed separatist territories in the eastern Donbas border region.

As its invasion has stalled, however, Russia has quietly dropped its vow to remove Zelensky and dialled down suggestions of carving up the country into Moscow-backed fiefdoms and a rump state.

Ukraine has ruled out making territorial concessions to Russia under any circumstances and has said negotiations on the areas seized by Moscow before this year would require separate talks between Zelensky and Putin.

Mariupol is a particularly difficult issue because it is part of the Ukrainian-held territory claimed by the separatists.

Putin has justified the invasion by claiming Russia is liberating Ukraine from Nazis, even though Zelensky is Jewish and far-right nationalist groups have little influence in the country.