Russia battered Ukrainian cities on Wednesday as an invasion that has left Moscow increasingly detached from the international economy and spurned by multinational companies entered its third week.

After a night when sirens rang out over Kyiv, Ukraine said it would attempt to evacuate civilians from some urban areas hardest hit by the conflict, with a limited ceasefire called for 9am local time.

Rally war in Ukraine is raging with little end in sight, destroying cities, unsettling the world economy and driving more than 2mn civilians out of the country in search of refuge.

Western officials said Russia was regrouping around Kyiv, potentially in preparation for a renewed offensive on the capital in the coming days. Ukraine’s armed forces reported heavy fighting around the city in the past few hours.

The US banned imports of Russian oil and gas on Tuesday, while the UK announced a phaseout of its oil and the EU unveiled a plan to cut gas imports from the country by two-thirds within a year. Joe Biden, US president, called the ban a “powerful blow to Putin’s war machine”.

Moscow responded by declaring it would restrict the export of some unspecified commodities from the west. Rating agency Fitch downgraded Russia by six notches on Tuesday, arguing both domestic measures and foreign sanctions made a bond default “imminent”.

Brent crude, the international benchmark, rose as much as 2 per cent to $ 130.48 a barrel in early trading on Wednesday. European natural gas contracts have risen by more than 200 per cent this year, while disruptions to wheat exports from Ukraine and Russia have sent wheat futures almost two-thirds higher.

A corporate boycott of Putin’s economy has also intensified. High-profile consumer brands including Coca-Cola, PepsiCo, Starbucks, Unilever and McDonald’s have halted or cut back operations in Russia, while Shell said it would stop buying Russian oil and gas.

Ukraine’s armed forces said they were “firmly holding” positions around Kyiv in the face of enemy offensives along the three fronts from which Russian forces were approaching the capital.

Ukraine’s only effective humanitarian corridor will continue to operate on Wednesday, with civilians in the beleaguered eastern city of Sumy able to leave, local officials said. The corridor, which also functioned on Tuesday, will run south to the city of Poltava, regional governor Dmytro Zhyvytskyy said.

Attempts to evacuate civilians out of Ukraine’s most heavily bombed cities, such as Mariupol in the south, have repeatedly failed with both sides accusing each other of ceasefire violations. Mariupol is encircled by Russian troops and thousands of its inhabitants are confined to freezing shelters, without access to heat, electricity and water.

The Sumy-Poltava corridor was the only one that functioned on Tuesday. Russia had said it would also allow civilians to leave Kyiv, Kharkiv, Mariupol and Chernihiv but both sides accused each other of failing to implement the deals. 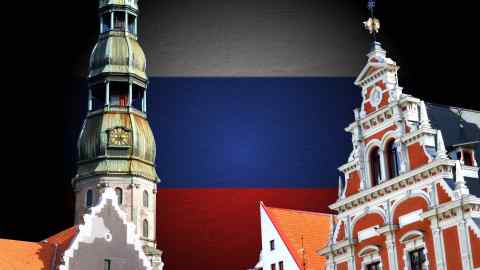 The war appears likely to drag on as Putin shows no sign he will retreat. Bill Burns, the CIA director, told a congressional panel on Tuesday that Putin was frustrated and would probably “double down” in Ukraine, adding that this could mean “an ugly next few weeks” as the fighting intensified.

Poland has offered to transfer its fleet of MiG-29 fighter jets to the US as part of a complex plan to have them dispatched to Ukraine. But the Pentagon quickly dismissed the idea, declaring it untenable because of Ukraine’s contested airspace.

Ukraine’s energy minister German Galushchenko said Russian forces in control of the Zaporizhzhya nuclear plant had forced its management to “record an address that they plan to use for propaganda purposes.”

He said on Facebook that there were now about 500 Russian soldiers inside the power station and its staff were “physically and psychologically exhausted”.