Shares rose in Russia as the Moscow stock exchange partially reopened following a trading suspension of more than three weeks after sanctions sent equities into freefall.

The benchmark Moex index was up about 9 per cent in the morning trading with shares changing hands in Moscow for the first time since February 25.

Trading resumed in 33 of the 50 stocks that make up the Russian equity benchmark, including Gazprom, Sberbank, Rosneft and VTB Bank, for a shortened trading session running from 9:50 am to 2pm Moscow time.

The resumption of trading comes days after the central bank took its first steps to settle billions of dollars worth of equity trades by international investors that had become trapped when Vladimir Putin introduced capital controls in late February.

Many restrictions remained in place even after the bourse reopened. Short selling was banned and while local investors were allowed to trade relatively freely, foreign investors were unable to exit the market.

And while trades could be settled in both US dollars or rubles, foreign investors were still banned from selling shares until April 1. All money must also remain in Russia even after investors cash out.

The White House blasted the partial reopening of Moscow’s stock exchange as a “charade” ahead of President Joe Biden’s appearance at meetings with NATO, G7 and EU leaders in Brussels, vowing that the US would seek to further isolate Russia from the global economy as long as Putin continued his war against Ukraine.

“Russia has made clear they are going to pour government resources into artificially propping up the shares of companies that are trading. This is not a real market and not a sustainable model, ”said Daleep Singh, deputy US national security adviser, in a statement on Thursday morning. “What we’re seeing is a charade, a Potemkin market reopening.”

The Moex gains on Thursday still left the stock benchmark down almost 30 per cent this year, while the ruble has fallen about a fifth against the dollar over the same period. 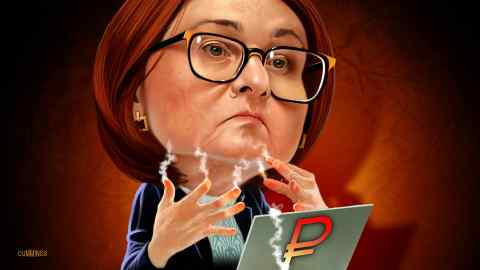 The country’s central bank has taken expansive measures to combat financial instability caused by western sanctions imposed on Russia, including raising its benchmark interest rate to 20 per cent at the end of February.

Last week, the central bank kept rates at that level as it sought to evaluate the impact of the dramatic tightening on the economy.

“The key argument in keeping the rate unchanged was that the much higher policy rate has broadly helped stabilize the financial system by making it less advantageous to withdraw money from banks,” said Ivan Tchakarov, an analyst at Citigroup. “The next task the [central bank] is facing is managing inflation expectations and the anticipated surge in price growth. ”

On Wednesday, analysts at S&P Global Market Intelligence warned that Russia faced its “deepest recession since the 1990s”, predicting that gross domestic product would tumble 22 per cent in 2022.