The top floor of an office building in central Kyiv, its windows taped over with sheets of A4 paper, has been transformed into a makeshift military supply depot, as ordinary Ukrainians took up arms to defend their city from Russian invaders.

By Saturday, three days into Russia’s assassination on Ukraine, armed men in military fatigues – with yellow masking tape encircling their sleeves to mark themselves as Ukrainians – were organizing patrols and assistance to the troops defending Kyiv as enemy soldiers closed in. Russian agents are believed to already be in the city center.

Inside the office block that has been abandoned apart from the volunteers, automatic weapons were propped up against the walls, and the floor was littered with boxes that previously contained drones destined for frontline troops.

In an adjoining room, young volunteers were busy writing posts for the “Ukraine: Operational” channel on the social media platform Telegram, informing Ukrainians about the progress of the war and how to help their country’s defense. The kitchen was well supplied with bottled water and stocks of last-minute food supplies as most of Kyiv’s grocery stores closed.

As Ukraine is left to defend itself after Russian President Vladimir Putin’s order to invade early on Thursday, civilians and the Ukrainian diaspora have stepped in with donations of money, clothes, food, power banks and weapons.

In a country with a long history of partisan warfare, Ukrainians say they expect civilian fighters to engage the Russians in a fierce battle if troops advance toward the city center.

“Kyiv is not a simple place where Russians can just walk around,” said Serhiy Prytula, a television celebrity turned politician who joined Ukraine’s Maidan democratic uprising in 2014 and this week put on a uniform as a volunteer fighter. “I think they have some mistaken illusions if they imagine this is a country where people are afraid.”

The boundary between civilian volunteers and combatants has been blurred, after a weapons distribution scheme announced this week led about 18,000 people to pick up guns in Kyiv alone.

Russia’s invasion of Ukraine has transformed its people, starting with President Volodymyr Zelensky, who some Ukrainians formerly dismissed as a frivolous figure but has, in the space of less than a week, stepped into a Churchillian role.

Since the invasion, his office has regularly published what are essentially proof of life videos filmed in the government complex, featuring morale-boosting messages from the Ukrainian leader, who says Russia wants to assassinate him. “We held firm,” Zelensky said in an address on Saturday morning. “We have understood and successfully repelled enemy attacks.”

Putin’s goal of securing a quick victory has been thwarted in several places, including Kyiv and the second-largest city of Kharkiv.

With Russian heavy vehicles halted for now on Kyiv’s outskirts, young people have been gathering in bars, restaurants, and other sites around the city to make Molotov cocktails.

Ukraine’s military has urged people to make home-made weapons, and the internal affairs ministry’s official Telegram channel this week published a how-to information graphic. The ministry on Friday urged people to use them in Obolon, the northern suburb where Russian troops’ advance has halted for now.

Oleksandr, 28, who ran a clothing company before the war began, has been using petrol and jam jars.

“It’s very easy to destroy a tank by throwing just one or two at the back,” he told the Financial Times. “It will go inside the engine because there is a place where it takes in air. Then you can open the place where the crew sits and put a Molotov inside. ” 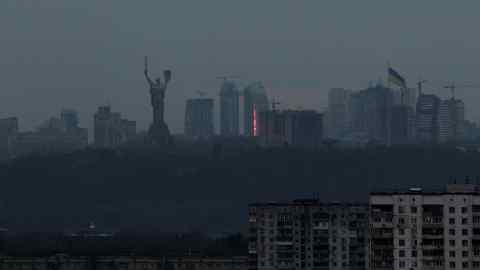 Some of Ukraine’s civilian fighters are conflict veterans who gained combat experience during Russia’s hybrid invasion of the Donbas region in eastern Ukraine in 2014-15.

“This is our land, and we don’t have any choice,” said Roman Sinicyn, a former businessman and political activist who volunteered as a fighter in the Donbas in 2014. “I’m going to fight.”

His job now, he said, was “to help our guys have more supplies” and engage any invaders he encountered. “For sure, if I see some Russians I’ll kill them,” Sinicyn said.

Years of conflict first in eastern Ukraine and now the nationwide war with Russia meant that “nobody is afraid”, said Masi Nayyem, a lawyer and war veteran.

Nayyem, 37, was born in Afghanistan and migrated to the Soviet Union as a child. Ukraine, he said, “is my home”.

Like others in Kyiv, he is baffled and disappointed by the West’s failure to stop Putin. “I think it’s not a question of whether we win, but when we win,” he said. “But if Russia wins now, it means the whole order built after world war two will be destroyed.”