Five days into the conflict with Ukraine, events are moving so fast that Illarion, a 37-year-old Muscovite programmer, has decided he needs to be prepared for the worst – having to flee Russia.

“A few days ago we were all saying, of course there won’t be any war. Then the war happened. Then we were saying there won’t be a nuclear war, we won’t have to flee the country, “said Illarion, one of hundreds of people standing in line at ATMs across the capital.

In recent days, large queues have formed at banks and cash machines as residents search for US dollars, increasingly scarce after the West imposed financial sanctions on Russia, limiting its access to foreign currency.

Some people lined up for hours waiting for dollars to arrive at a branch or ATM, only for the machine to be emptied within minutes. Some even tried to track cash trucks around the city, they told the Financial Times, in order to have cash in case they need to flee the country.

“We are now wondering whether the state is going to forcefully convert dollar savings into rubles to take the citizens’ dollars because they are being cut off from the outside. That is a reality we see on the horizon, ”said Illarion. “I don’t think it is a joke any more that we may have bombs flying at us and we’ll need to flee the country, which requires having dollars in cash or cryptocurrency,” he added.

Whoever had been in two minds, will now be persuaded to leave as the iron curtain rolls down.

The Russian ruble lost more than 30 per cent at the start of trade on Monday against the dollar after the US and the EU imposed sanctions on its central bank and cut access to the Swift payments system for some Russian banks.

Moscow then announced a ban from Tuesday on foreign currency transfers to banks outside the country.

As well as queueing for cash, there also appears to be an increase in the number of Russians considering emigration. The search for the word “emigration” has increased fivefold last week, according to Google trends, which analyzes the frequency of online searches. Most of the searches come from Murmansk, the Far Eastern region of Russia neighboring Alaska, as well as St Petersburg, a traditionally liberal city, followed by Moscow.

Lev Gudkov, the head of the independent polling center Levada, told Kommersant FM radio that the number of people willing to leave the country had increased significantly in February, reaching 22 per cent of Russians and to nearly half among the young.

Reasons include limited business opportunities, incompatibility with the “increasingly repressive regime”, and anxiety among parents of children approaching conscription age, he said. “Whoever had been in two minds, will now be persuaded to leave as the iron curtain rolls down.”

Some have compared the situation to that endured during the communist era, when the Soviet Union was in effect shut off from the rest of the world. Others expect a repeat of the 1990s, when a collapse in the value of the currency pushed up the cost of living.

“I recall in the 1990s prices were set in dollars, even if it was illegal. The ruble was worthless. And I worry this is what we will see again, ”said Alexei, an IT specialist, who had been waiting for several hours at a mall where he exchanged rubles into dollars at the record rate of more than Rbs100 per dollar. Before the war, one dollar bought Rbs70. He too said he was looking for ways to emigrate.

Elena, a 29-year-old HR specialist from Moscow, said she is thinking of following her friends abroad. They left for the United Arab Emirates as they could not see a positive future in Russia.

“The feelings are mixed, we are completely unprepared. This is a total mess, and it is very scary in all senses, not only that the economy collapses and we will live off [food] allowance cards as our parents and grandparents [did]. There is a sense of total frustration, ”she said, referring to the system of rationed purchases prevalent in the 1990s. 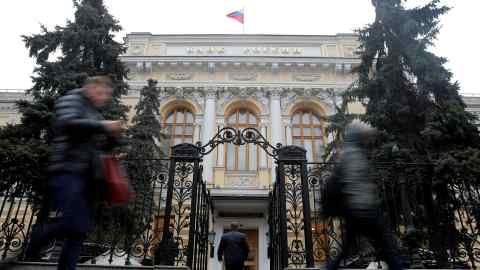 “We really hope the situation can be resolved with minimal losses but knowing the policy of our country and where it is headed, I am not positive about the prospects. We hope for the best but prepare for the worst. I’m starting to think I’ll be of more use even to my own family, my parents, by being out of here. “

Others have lined up to buy iPhones and TV sets, spending rubles now in the expectation that they will soon be worth less as prices rise.

“For the past few days, it’s been like Christmas for us,” said a shop assistant in an electronics shop. “People are ready to buy things even [though] we have been raising prices every few hours based on the forex situation. ”

In the absence of certainty, people such as Illarion are planning for all eventualities. “I have ruble savings in case everything will be OK, and dollar savings in case things are not OK. I can see a scenario where the state takes the dollars away forcefully in return for rubles, ”he said.

What is clear is that for now all bets are off. “Anything that previously seemed impossible we have to have a plan for,” Illarion said.