Saudi Aramco has reported its highest annual earnings since an initial public offering in 2019, as the world’s largest oil exporter cashed in on resurgent energy demand.

Net income more than doubled in 2021 to $ 110bn, the company said on Sunday, and it maintained its full-year cash dividend – one of the largest in the world – at $ 75bn. Analysts had forecast net income of $ 109.7bn, according to an average compiled by the company.

The state-backed group, which had reported earnings of $ 49bn a year earlier, said the 124 per cent increase was driven by “higher crude oil prices, stronger refining and chemicals margins and the consolidation of SABIC’s full-year results”. The company acquired a 70 per cent stake in Sabic, the Saudi petrochemicals company, in 2020.

The dividend included $ 18.8bn for the fourth quarter to be paid before the end of March. The payment is a vital source of revenue for the Saudi government, which owns 98 per cent of Saudi Aramco stock after a small portion of the company’s shares were listed in December 2019.

The company also said it would distribute $ 4bn in bonus shares to existing shareholders.

Gearing, which the company defines as a measure of the degree to which operations are financed by debt, dropped from 23 per cent in December 2020 to 14.2 per cent, as the company deployed part of its $ 107.5bn free cash flow. That compared to minus 4.9 per cent in the first quarter of 2020 before the slump in prices due to the coronavirus pandemic forced the company to borrow heavily to maintain its dividend last year.

Saudi Aramco and international rivals, including Chevron, ExxonMobil and BP, have benefited from global economic recovery and supply constraints, which have pushed oil prices above $ 100 a barrel for the first time in more than seven years.

Prices have been driven even higher by fears that a boycott of Russian oil following its invasion of Ukraine could remove up to 2.5mn barrels a day of crude oil and petroleum products from the market and the reluctance of Saudi Arabia and its allies in the Opec + group to boost production to compensate.

The cartel has stuck to an agreement reached last year to increase output by no more than 400,000 b / d each month, even as some members have failed to hit their quotas. The US and other big consumers have repeatedly called on those countries with significant spare capacity, such as Saudi Arabia and the United Arab Emirates, to pump more. 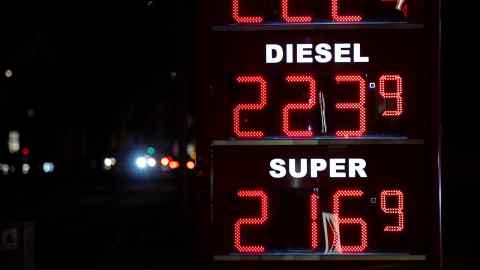 Saudi Aramco said average crude oil production in 2021 was 9.2mn b / d, as it gradually replaced the output cut at the start of the pandemic. It is in the process of increasing its maximum production capacity from 12mn to 13mn b / d.

The company added it was investing in carbon capture and storage, renewables and low-carbon hydrogen production after pledging in October to achieve net zero operational emissions, known in the industry as scope 1 and scope 2, from its wholly owned assets by 2050.

The decision was announced following a move by the Saudi government to cut carbon emissions by 2060.