For weeks, German chancellor Olaf Scholz was ridiculed by politicians and journalists around the world for refusing to even name Nord Stream 2, let alone promise to halt it if Russia invaded Ukraine.

On Tuesday he surprised even hardened political observers by freezing the approval process for the gas pipeline from Russia to Germany – part of a broad European response to Moscow’s decision to recognize two breakaway regions of Ukraine as independent republics.

NS2’s backers, including successive German governments, always insisted the project was a purely commercial enterprise. But its critics saw it differently – as part of a Kremlin plot to increase Europe’s dependence on Russian energy exports, with Germany cast as its willing accomplice.

Halting the project, which is completed but awaiting approval, removes an irritant that burdened Germany’s relations with the US and its east European partners. Former President Donald Trump enraged Berlin by imposing extraterritorial sanctions on companies involved in NS2’s construction, and in recent years opposition to the pipeline has been one of the few things that Democrats and Republicans in Congress could agree on.

The pipeline came to symbolize Berlin’s close energy ties to Russia, a relationship it seemed bent on expanding even in the midst of the worst crisis in east-west relations since the Cold War.

Russia hawks in Germany were delighted at Scholz’s decision but said Berlin should have acted much sooner. “The fact that it could even get this far was a grave mistake,” said Norbert Röttgen, a foreign policy expert with the opposition Christian Democrats. “It’s been clear for a while now that it was finished.”

From Russia there was a flash of sardonic humor. “Welcome to the brave new world where Europeans will soon be paying € 2,000 per 1,000 cubic meters of gas!” said Dmitry Medvedev, former president and deputy head of the Security Council.

Medvedev’s Twitter message touched a sore point. Germany continues to import large quantities of Russian oil and gas; Scholz said on Tuesday that gas accounted for a quarter of the country’s energy mix, and more than half of it comes from Russia.

Germany’s reliance on gas could even rise. The country decided to shelve nuclear power in the aftermath of the 2011 Fukushima disaster in Japan and Scholz’s coalition government is committed to phasing out coal-fired power by 2030.

Scholz insisted, however, that Germany would wean itself off its addiction to gas. It would be carbon-neutral in 25 years, he said, and would expand solar and wind power capacity “so we can produce steel, cement and chemicals without using fossil fuels”. Germany is also building import terminals for liquefied natural gas so it is less reliant on Russia.

NS2’s approval by Germany’s energy regulator had long been seen as a foregone conclusion, especially after the previous government of Angela Merkel concluded that the pipeline, which would double the volume of gas piped directly from Russia to Germany under the Baltic Sea, would have no negative impact on the security of Germany’s energy supply.

That assessment has now changed. Robert Habeck, the Green Economy Minister, said on Tuesday that the crisis over Ukraine, coupled with the “situation on the gas market over the past few months. . . virtually forces us to re-evaluate ”the project. He had therefore withdrawn the energy security report, and in so doing frozen the certification process. Until a new one is completed, “NS2 can’t be approved”, he added. 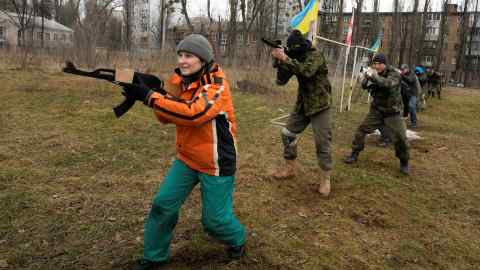 Habeck made clear it was not just Vladimir Putin’s actions this week that had triggered this change of heart but Russia’s behavior over several months.

Some energy experts have suggested that in the run-up to Europe’s winter heating season, Gazprom deliberately held back supplies to the spot market and depleted its gas storage facilities in Europe while gas prices and energy demand were rocketing. Gazprom denied any such interference with supplies.

“We have to overcome our lopsided dependence on one supplier, one that in the past few weeks and months has spent to be geopolitically unreliable, acting according to its own calculations,” Habeck said.

In Moscow, Germany’s NS2 move was viewed as an act of deliberate self-harm. “The German decision is equivalent to shooting yourself in the foot,” said a senior figure in Russian energy circles, comparing it to the nuclear phaseout announced in 2011. “And to be honest, if it [NS2] comes to a complete and utter halt, we should just build a cross-link gas pipeline to China in three to five years and move on. ”

But in Berlin there was acclaim for the decision. Germany was, said Jana Puglierin, head of the European Council on Foreign Relations in Berlin, “raising the bar for all other EU countries”. The government was “ready to bear potentially high costs”, she added. “For me, this is real leadership at a crucial moment.”