Four executives of SMBC Nikko Securities have been arrested for alleged market manipulation after prosecutors raided the company’s Tokyo headquarters and the individuals’ homes.

The arrests follow a lengthy investigation by regulators into how certain blocks of shares and related trades were handled by the company, one of Japan’s top three brokerages and a unit of the country’s second-largest bank, according to two people with knowledge of the situation.

The arrests of two Japanese and two foreign nationals include the head of the company’s equities division, Trevor Hill, an American and the most senior executive of the group.

Former executives of SMBC Nikko and other members of Tokyo’s financial services industry said the arrest of Hill, in particular, illustrated the risks of being a senior manager at a Japanese company, where legal responsibility can fall to a small group of individuals.

Yuichiro Kondo, chief executive, said at a press conference on Saturday that the company had fled an investigation into the matter. “From the standpoint of a securities company that ensures the fairness of the market, we deeply apologize for causing a situation that could shake the confidence of the market,” he said.

Kondo added that the brokerage could be indicated as an organization on the same charges but he did not intend to resign. “I recognize that it is my responsibility to accurately recognize the situation, implement improvement measures, and make every effort to regain the trust of customers and other people,” he said.

The charges, according to Kondo, relate to block offer trades handled by SMBC Nikko when clients had large volumes of individual stocks to sell. People close to the company said the investigation appeared to have focused on whether the brokerage would enter buy orders for those shares during trading hours so that their price was maintained above the minimum level agreed with the seller.

Kondo said an internal survey revealed that the company had purchased several stocks on the day of the block sales. “We recognize that making our own purchases at the time when the price of the block offer is determined is clearly an act that could raise questions about the fairness of the market and should have been avoided as an act that violates our code of conduct,” he added. 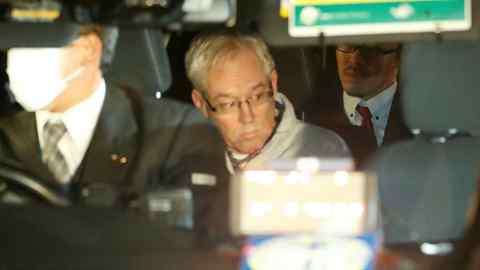 The allegations were disclosed as Tokyo has been attempting to present itself as a global financial center, particularly as many companies reconsider their presence in Hong Kong.

Critics of Tokyo’s efforts to promote itself cite a number of reasons why the city has not been more attractive, including concerns over a legal system that has been used to allegedly extract confessions by threatening prolonged imprisonment without charge. Arrested individuals can be questioned without the presence of a lawyer for days.

The Japanese justice system has been under intense international scrutiny after the conviction last week of Greg Kelly. The former legal head of Nissan was given a suspended prison sentence for his role in the attempt to disguise the full extent of former chair Carlos Ghosn’s remuneration from shareholders. Ghosn has denied any wrongdoing.

The Tokyo prosecutors’ office could not be reached for comment. Hill did not immediately respond to a request for comment.