Daniel Ek, Spotify chief executive, told investors it is “too early to know” whether the backlash over Joe Rogan’s podcast has cost the company customers, his first acknowledgment that the fallout could affect the business financially.

“Usually when we’ve had controversies in the past those are measured in months, not days,” Ek said on a call after quarterly earnings on Wednesday.

Over the past week or so, performers such as Neil Young and Joni Mitchell have pulled their music from Spotify because they believe Rogan’s podcast is spreading false information about coronavirus vaccines.

Ek defiantly confronted the fallout on Wednesday, telling analysts: “We don’t change our policies based on one creator, nor do we change based on any media cycle or calls from anyone else.”

The controversy could not come at a worse time for Spotify, which warned on Wednesday that subscriber growth would slow significantly in the first quarter. Its shares fell as much as 23 per cent in after-hours trading before recovering to hover around 10 per cent lower

We don’t change our policies based on one creator, nor do we change based on any media cycle or calls from anyone else

Spotify and Young’s camp have been in talks over how to resolve the disagreement, according to people briefed on the negotiations. Before considering a return to the site, Young wants more concrete details about Spotify’s promise to add “content advisory” notices to any podcasts discussing the coronavirus, the people said.

Ek promised on Wednesday that these notes would be “very visible” and would be rolled out “right now, as we’re speaking” on Spotify’s app.

As Spotify has grown over the years it has tried a delicate balancing act with music and podcasts that might divide its audience. Aside from briefly removing R Kelly from its playlists in 2018, it has largely avoided the thornier problems around content standards that plague other media companies.

But the combination of the proliferation of coronavirus misinformation, Spotify’s long-simmering tensions with musicians, and the outspoken podcast star have created a perfect storm for the music streamer. Rock stars are revolting, social media is abuzz with people pledging to #DeleteSpotify, and even the White House has weighed in. Press secretary Jen Psaki told reporters that Spotify’s disclaimer plan was a “positive step”.

Musicians have for many years represented Spotify, arguing the group should pay more for their work. With the Rogan fracas, that tension encouraged some to deploy the nuclear option of removing their music from the service.

Most performers, however, do not own their music, and the big record companies are unlikely to approve a clutch of contemporary stars deleting their songs from the biggest distributor.

Universal Music has already signaled its hesitancy, and has not taken steps to remove the music it owns by the singer-songwriter India.Arie or by Mitchell despite their public calls for it to do so, according to people familiar with the matter.

“We can’t get into a situation where any time an artist has a problem with a service, we take down their music,” a senior label executive told the FT.

In issuing mea culpa over accusations that Spotify’s Rogan podcast is spreading false information about Covid-19 vaccines, Ek had struck a tone similar to that of large technology companies such as Facebook, arguing that the company should not become a “censor”.

But Facebook’s “fake news” problem stems from millions of users posting to its site. Spotify, in contrast, has paid Rogan $ 100mn to produce podcasts and it distributes the show exclusively. That makes the company more of a publisher than a moderator.

As its business has evolved, Spotify has drifted further into the role of a media company that curates and commissions creative work. It first revealed its intentions to leap into podcasts in 2019, but Ek had long been wanting to branch out from music, a business with poor economics; the company pays two-thirds of subscription proceeds back to song owners. 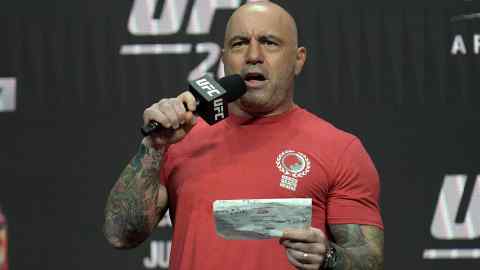 “You were totally beholden to the record labels,” said a former Spotify executive who was involved in discussions about how to diversify. “You’re always going to have these contract negotiations with Universal and it’s going to be a nightmare and your margins are going to be crap.”

Podcasts provided a possible way out of that punishing business model, and a fresh narrative to sell to Wall Street. “If you become an audio company, you have more leverage because you are not totally beholden to Universal”, the executive added. “Daniel [Ek] and the braintrust were like, ‘how do we diversify our offerings?’ “

Spotify has spent more than $ 1bn buying podcast companies, quickly establishing itself as a player in the nascent industry. In 2020, the company struck gold by convincing Rogan, the world’s most popular podcaster, to exclusively make podcasts for its platform.

But its biggest star, with its brash contrarian style, has also been a liability. Spotify has deleted more than 40 of Rogan’s episodes, including interviews with conspiracy theorist Alex Jones and former Breitbart editor Milo Yiannopoulos.

Seeking to assure critics, Spotify this week made its content rules public, which include a ban on “dangerous false or dangerous deceptive medical information”. But the examples Spotify provided of what meets the threshold of dangerous – such as drinking bleach or suggesting that vaccines are “designed to cause death” – allow for considerable leeway.

Rogan’s December 31 podcast episode, in which guest Robert Malone claimed that US hospitals were financially stimulated to falsely attribute death to Covid-19, does not violate Spotify’s rules, for instance. It has not been removed.