The gate that seals off the FT’s Olympic hotel from the rest of Beijing is padlocked not once but twice. Every morning, after removing the padlocks and a supplementary 10ft pole that looks as if it belongs in a siege, masked guards open it to let the bus in. The gate is momentarily bolted shut again while a handful of guests board. It is then briefly reopened, so that the bus can leave for the media center. Then it is locked again.

The entire process takes a matter of minutes, is repeated many times a day and is typical of life within the “closed loop” system that has been established in the Chinese capital for the Winter Olympics. Its aim is simple: to stop the Covid-19 virus spreading from the rest of the world – embodied by athletes and journalists attending the Games – into real China.

Like many of the pageants, fairs and exhibitions that mapped out history before it, the Beijing Winter Olympics of 2022 condenses an era into a moment. It is the culmination of the most extraordinary anti-pandemic machine ever assembled. Two years after the virus emerged in the city of Wuhan, China is the last major economy on earth still trying to eliminate it entirely. Through a combination of quarantine, mass testing and the lockdown of whole cities, it has recorded 107,000 cases in total – fewer than the US recorded on New Year’s Day alone.

Any Olympian unaware of the tenor of China’s “zero-Covid” policy would have been in for a shock at Beijing’s international airport, where all the staff were wearing full hazmat suits. Arrivals, if they had submitted proof of negative tests and vaccination before flying, were spared the three weeks of solitary hotel confinement that mainland China and Hong Kong have typically imposed. But they might at any time be isolated if one of their daily tests comes back positive – an anxiety-inducing prospect for people who realize years of work in a single day. One unidentified figure in the airport appeared to be wearing a full oxygen mask. Several athletes have already missed their events.

Tokyo also introduced a bubble for the summer Olympics last year, but it was porous and guests could walk around. Beijing’s bubble is on a different level and has a slight doomsday theme. Hotel rooms usually provide guests with one complimentary bottle of water; my room provided 24 liters. As I stepped out on the first morning, an employee in a hazmat suit was heavily dousing the corridor carpets with disinfectant. The hotel restaurant serves food with disposable plates and cutlery. Masks are not only obligatory; they must be a certain kind: N95, KN95 or FFP2. Many staff supplement them with a visor.

Beijing is a place of uneasy geopolitical power, where athletes have been warned to watch what they say and almost every journalist has a burner phone

Rather than a territory in its own right, the “closed loop” is a constellation of hotels and sporting venues dotted across the city, reachable on special buses that authorities have instructed people to avoid interacting with even if they crash. Beijing remains a city you never quite arrive in: a medley of high-rise flats and national headquarters where the austerity of the architecture is matched only by the austerity of the winter cold; a place of growing but uneasy geopolitical power, where athletes have been warned to watch what they say and almost every journalist has a burner phone.

The borders of the loop are flexible, but never penetrable. At the opening ceremony, western political leaders were absent but some of the attendees were drawn from what insiders quickly began thinking of as the outside world. Authorities last month canceled ticket sales but have since invited 150,000 people to attend events.

Yan Jiarong, a spokesperson for the organizers, said at a press conference this week that spectators come from inside and outside the closed loop – a word that uses the same Chinese character as the city’s ring roads often referenced to describe where Beijing residents live. Venues are sometimes divided between inside and outside sectors. Near the media center – close to an 846ft tower completed on the back of the last, very different Chinese Olympic Games – there is a section of fence where those on the outside congregate to take photos of the loop’s interior.

One of the burdens of the closed system, in a city that feels like the capital of something far more than a single country, is the constraints on dining. There are no shops except for those in hotels and a kind of frontier-town general store at the media center, which stocks items such as beer, calculators and chocolate (which sold out rapidly). The food choices are adequate but limited, and must be consumed at tables where plastic panes block off fellow diners in every possible direction, in keeping with an atmosphere where some lifts have signs saying “don’t talk”.

At the media center, certain meals – such as burgers and fries – are assembled by robots in an apparent bid to prevent virus transmission. But these robots seem to generate rather than replace jobs: the burgers must be passed to you by a human server and involve some sort of behind-the-scenes activity. Across the canteen there is a cocktail bar – an incongruous glimpse of luxury that has been widely shared online, where a robot shakes the cocktails but, again, the staff hand them over.

In fact, the entire closed-loop operation depends on vast manpower, especially from the thousands of volunteers who are often drawn from nearby universities, although their youth is at first disguised by their masks. Like other workers at the Games, they will have to quarantine for weeks when they go home. But their spirits are high. At the curling, one bagpipe player from Henan province said that, for the Olympics, quarantine is “very much worth it”. In a taxi – an occasional alternative to the buses that allow you to travel between hotels – the driver explained that the post-Olympics hotel quarantine would be free.

The Winter Olympics, which some of the athletes refer to as the “Covid Olympics”, is an event where the healthiest people seem to be the most afraid of the virus. “To be negative for Covid,” replied Claudia Pechstein, a German flag-bearer who was competing at her eighth Olympics, when asked about her main ambition at the Games. One member of the winning Norwegian mixed relay biathlon team did not attend the press conference when his team won gold; he had been isolating due to a possible coronavirus contact. In the same room, social-distancing signs advised keeping one meter from each other, and two meters from the athletes.

If the cold war was reflected in the 1956 water polo match between Hungary and the Soviet Union, there was more than a hint of the war on Covid at the women’s ice hockey match between Canada and the Russian Olympic Committee. Proceedings were delayed by nearly an hour after players for the former refused to take to the ice while they waited for the Russian Olympic Committee’s Covid test results, given several recent positives. Eventually, the game was played with both teams wearing face masks beneath their helmets. But it was difficult to ascertain what had happened. A chill typically descends on press conferences within the loop; everyone is striving as hard as possible to say as little as possible on topics outside sport. The Canadian coach told reporters he had no information on the delay, other than “health and safety concerns”.

Aside from the consolation of world-class winter sports, the loop feels a bit like being trapped in an airport. It is the continual journeys on buses that offer the clearest window into actual Beijing and beyond – on one journey we flashed past locals skating on a frozen river. Several skiing events take place a three-hour drive outside the city in the mountains of Zhangjiakou – which, after a few days in the loop, feels like a form of freedom. 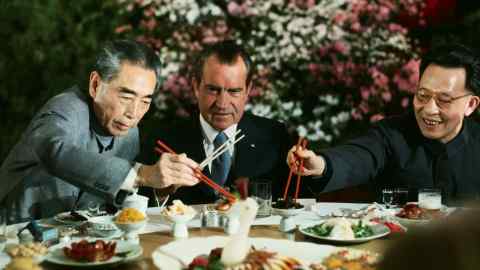 Last weekend, the road between Zhangjiakou and Beijing was almost entirely deserted. It was unclear whether this was because it was the last day of the Spring Festival, or whether no one used this particular road much anyway. The journey conveyed a sense of desire, so dominant at the 2008 Olympics, to impress on outsiders the miracle of China’s rise. But the roads and bridges have this time been overshadowed by the less visible and more astonishing infrastructure of the coronavirus system – one that aims to impress a domestic rather than a foreign audience, and one that surely could not be replicated anywhere else. Low infections, like high GDP growth, have become a kind of mandate to govern; the costs, like off-balance-sheet debts, are difficult to pinpoint.

As with China itself, the closed-loop system was not always quite what it seemed. I asked the guards outside my hotel why, one morning, they were no longer using the 10ft pole that usually barricaded the gate – perhaps the harshness of the measures was being relaxed? They explained it was because the wind was low; it had only been there to stop the hastily assembled fencing from being blown over. But there were at least 10 visible cameras in the small area where the bus drove in to collect us. The borders of the loop might have been clearly demarcated, but the lines where its ambitions and pressures blurred into a wider climate of state control were ambiguously drawn.

Zero-Covid is something you feel rather than see, an ongoing sacrifice that quickly locks you into its almost meditative rhythms. After a week, daily cases at the Olympics, which number in the hundreds combined and at one point overtook those in all of neighboring China, had fallen to almost zero. But it is difficult to celebrate the staving off of disaster, even if it is usually a greater achievement than mere success.

At the speed-skating stadium, I took off my KN95 mask for a little too long while drinking a Costa coffee, one of the few daily joys of life within the loop. A volunteer swiftly rushed over. I apologized, gesturing at the drink. “But quickly,” he nodded solemnly. He paused, as though searching for a word that might guide me through the entire system. “You can’t enjoy it.”