Progressive challenger Jessica Cisneros has forced incumbent Democratic congressman Henry Cuellar into a run-off in a closely watched congressional primary election in Texas that signals a tough path for Democrats heading into November’s US midterm elections.

The midterms will be a crucial test for President Joe Biden and the Democrats as they look to cling on to control both chambers of Congress despite declining approval ratings and a historical record of the president’s party losing seats two years into a White House tenure.

Texas was the first state to hold primary elections on Tuesday to select candidates for the November midterms. The intraparty battle between Cisneros and Cuellar in the state’s 28th congressional district, which stretches from San Antonio to a several hundred-mile span along the US-Mexico border, has been followed nationwide as a barometer of the mood within the Democratic party.

Cisneros, a 28-year-old immigration lawyer, has looked to follow in the footsteps of firebrand progressive congresswoman Alexandria Ocasio-Cortez and oust a longtime incumbent fellow Democrat with a challenge from the left. Her candidacy has been endorsed by several high-profile progressive lawmakers, including Ocasio-Cortez and Democratic senators Elizabeth Warren and Bernie Sanders.

Cuellar, 66, is a rare example of a conservative member of Biden’s party who favors abortion restrictions, laws that encourage gun ownership and stricter immigration policies. But he has enjoyed widespread popularity in the majority Hispanic area that he has represented since 2005, earning him the nickname “King of Laredo,” a reference to the large city on the US-Mexico border where he was born and raised.

This year’s contest is a rematch: Cisneros came within 3,000 votes of ousting Cuellar in a Democratic primary in 2020. Cisneros’s campaign had hoped that an energized progressive base and the lingering cloud of an FBI investigation over Cuellar’s campaign would push her over the top. Federal investigators in January raided Cuellar’s home amid an investigation reportedly connected to his ties to Azerbaijani politicians and business interests. Cuellar has said he is “fully co-operating with law enforcement” and insisted the probe “will show that there was no wrongdoing on my part”.

But neither candidate won outright following Tuesday’s primary, after a third candidate prevented either Cuellar or Cisneros from clearing the 50-point threshold required under Texas election law. According to the Associated Press, with an estimated 99 per cent of votes counted, Cuellar led by a razor-thin margin of just over 800 votes, with the support of 48.5 per cent of the district’s Democratic primary electorate, compared with 46.8 per cent for Cisneros.

That sets the stage for a run-off in late May – and almost three more months of aggressive fundraising and campaigning that exposes fissures in Biden’s party. While Cisneros has historically trailed Cuellar in terms of money raised, her campaign revealed last month that she had raked in more than $ 700,000 since the start of the year – almost five times Cuellar’s haul over the same period. 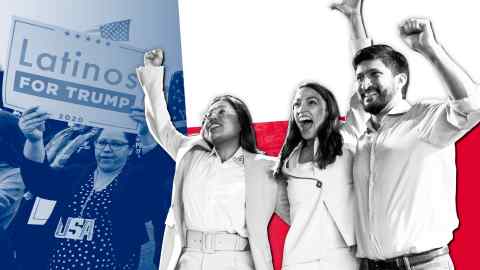 Democrats are not the only ones keeping a close eye on the 28th congressional district. Republicans have identified the seat as a key target for November’s midterms, after several counties in the congressional district swung aggressively towards Donald Trump in the 2020 presidential election. For example, Hillary Clinton won Zapata county, a largely rural, low-income area in the Rio Grande valley, by 33 points in 2016, but Trump took back the area by a margin of just over five points in 2020.

Republicans held their own primary on Tuesday to select a candidate to face either Cuellar or Cisneros in the fall. That primary will also head to a run-off in May, with Cassy Garcia, a 37-year-old former aide to Senator Ted Cruz, facing off against Sandra Whitten, a stay-at-home mother of four who is married to a US Border Patrol agent.

Garcia told the Financial Times in an interview last month it would be “easier” to beat Cisneros given the local electorate’s newfound enthusiasm for the Republican party and growing concerns about an increasingly left-leaning Democratic party.

Cisneros has campaigned on a commitment to Medicare for All, more liberal immigration laws and an embrace of the Green New Deal, a progressive package of environmental policies opposed by many in the area who work in the oil and gas industry.

“If I go head-to-head with Jessica, that is going to be a very easy win for us, because we are a conservative community,” Garcia told the FT. “We are not open borders, we are not socialists.”