Boeing has reported a pre-tax fee of $ 3.5 billion for its Dreamliner 787 program, with the expected cost of delays for wide-body passenger aircraft up to $ 5.5 billion.

Dreamliner production caused headaches for the aircraft manufacturer, which cut off deliveries for the second time in May after a number of manufacturing flaws were discovered by the company and investigated by US regulators.

Boeing also increased the amount of unusual production costs associated with the Dreamliner from about $ 1 billion to $ 2 billion by the end of 2023.

Financial charges “have significantly affected our profits,” CEO Dave Calhoun wrote in a statement to employees on Wednesday as the company released results from the last quarter.

The 787 Dreamliner is being produced “at a very slow pace and will continue to do so until deliveries resume,” Boeing said. The return to production of five of the aircraft per month, the rate at which it produced them by July 2021, will be “gradual”.

American Airlines expects its first 787 delivery in mid-April, a schedule that has not changed in the past few months, said Derek Kerr, the airline’s chief financial officer, during a call for the U.S. carrier’s January 20 profit.

But while the largest airline in the United States was expecting all 13 of its Dreamliner deliveries for 2022 this summer, it has since revised that number to four. “If there are further delays and this really affects the summer much more than expected at the moment,” Kerr said, Boeing has promised to compensate him for the additional losses. 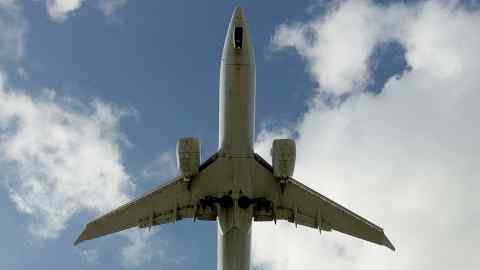 The aerospace giant reported a net loss of $ 4.2 billion in the fourth quarter, compared with a loss of $ 132 million in the previous quarter on revenue of $ 14.79 billion, missing analysts’ expectations for revenue of $ 16.5 billion. The adjusted quarterly loss per share was $ 7.69. The company said its cash flow had become positive – reaching $ 700 million – for the first time since 2019.

Boeing has said it will resume deliveries of 737 Max aircraft to China in the first quarter, pending final approval from Chinese regulators and airlines. The plane was stopped after two fatal crashes in 2018 and 2019. Production is up to 26 aircraft per month and this percentage is set to increase to 31 per month earlier this year.