The civil war in the ruling Conservative Party of the United Kingdom deepened on Sunday after a former minister accused the whips of Islamophobia after she was fired and warned not to discuss the issue in public.

Nusrat Ghani, who was transport minister from January 2018 to February 2020, claims she was told by a Tory whip that her “Islam has been raised as a problem” by Downing Street for her dismissal. She added that the whip told her that her “Muslim ministerial status makes her colleagues uncomfortable”.

Ghani, 49, told the Sunday Times that she felt “humiliated and powerless” after the episode and was warned not to discuss the question, or “her career and reputation will be destroyed.” She added: “I will not pretend that this has not shaken my faith in the party.”

The allegation comes as the Tories prepare for the expected publication this week of a report by Senior Officer Sue Gray on alleged Downing Street coupons during the blockade. The affair prompted a number of Tory MPs to submit no-confidence letters to Prime Minister Boris Johnson.

Downing Street said Johnson met with Ghani on July 1, 2020, after being informed of “these extremely serious allegations” and writing to her on July 10, expressing his serious concern and inviting her to begin a formal trial. complaint ‘. Number 10 added: “The Conservative Party does not tolerate prejudice or discrimination of any kind.

Mark Spencer, chief whip, identified himself with the whip she spoke to in March 2020, but described her comments as “completely false” and “slanderous.”

“It is disappointing that when this issue was raised, before Ms. Ghani refused to take the matter to the Conservative Party for a formal investigation,” he tweeted.

Spencer added: “I have provided evidence of Singh’s Islamophobia investigation, which concludes that there is no credible basis for the allegations.

But Ghani was defended by Education Minister Nadim Zahawi, who called for the allegations to be “properly investigated” and “racism to be removed”.

He tweeted with the hashtag #standwithNus, “there is no room for Islamophobia or any form of racism in our Conservative Party. Nus Ghani is a friend, colleague and brilliant MP.

Deputy Prime Minister Dominique Raab told Sky News that the allegations were “incredibly serious”, but said she had refused to file a formal complaint.

“It’s very unusual that the main whip came out and … . he categorically denied it with something that can only be described as the most frank and categorical words, “he said.

Several other prominent conservatives have expressed support for Ghana. Tom Tugendhat, chairman of the House Foreign Affairs Committee’s elected foreign affairs committee, has called for an investigation into the allegations. “There is no room for racism in the Conservatives.” Steve Baker, a prominent MP on the back bench, described her remarks as “completely unbearable” and said: “We need to get to the bottom of things.” 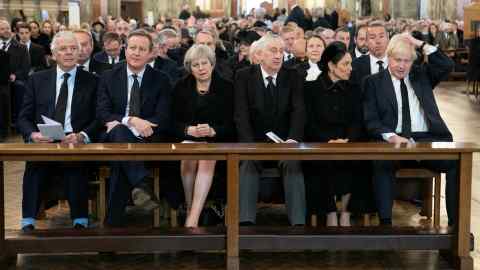 Sir Keir Starmer, the leader of the Labor Party, expressed solidarity with Ghana and blamed the culture “on top”. He said: “There is report after report of horrific behavior and lack of respect at the heart of this government.”

Meanwhile, Christian Wakeford, who joined the Tory Labor Party last week, described former education secretary and chief whip Gavin Williamson as the whip that threatened to cancel the construction of a new school if “it does not vote one way”.

Wakeford told the Sunday Times that Williamson told him: “It’s not very helpful to support the opposition [motion] against the department where you want an extremely big favor from him, so think about what you’re doing.

Williamson did not immediately respond to a request for comment.