The UK’s former counter-fraud minister has castigated government attempts to stop fraud in its Covid loan scheme as a “Dad’s Army operation”, accusing officials of “total naivety” in efforts to stop criminals taking suitcases of taxpayer cash out of the country.

Lord Theodore Agnew warned that the Treasury now faced an “avalanche” of claims from banks over the government guarantees in the flagship £ 47bn bounce back loans scheme (BBLS).

“These are going to start hitting the Treasury in industrial quantities in the next few weeks,” he told the House of Commons Treasury select committee.

Agnew urged ministers to demand that banks take greater responsibility over chasing down fraudsters that have exploited the scheme, but raised fears that the state guarantees would mean that lenders had little incentive to do so.

“There is still a chance to go after some of these people. . . my view is that they should push the responsibility back to the banks, ”he said, pointing to the large dividends and bonuses being paid in the sector. “They have a very strong moral obligation to support us.”

Agnew, who had been the minister responsible for Whitehall efficiency and fraud prevention, quit in January in frustration over the “lamentable” attempts to tackle crime in the Covid loans scheme.

He told the committee that it had been “happy days if you were a crook” in the first few months of the pandemic given the lack of checks on the money being lent by banks. Fraud risk was “ignored until far too late,” he said.

He said that “on the fraud side” of the Covid loan scheme, “it was just a Dad’s Army operation. . . they were lending money to companies that didn’t even exist before Covid broke out, because of the total naivety in the system, and not putting in proper checks. ”

“I am always writing letters of congratulations to Border Force staff for picking up suitcases of cash leaving the country,” he said.

The BBLS was designed by the Treasury to allow banks to quickly lend up to £ 50,000 to struggling businesses during the pandemic.

The state-guaranteed loans were handed out with only light checks on borrowers, which allowed fraudsters to take loans from banks through shell companies with invented revenues. 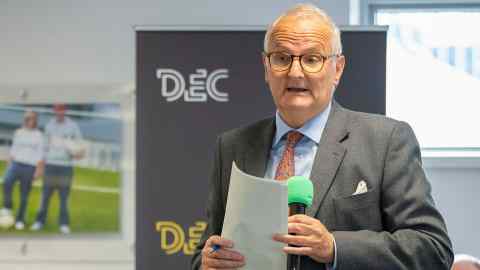 The Department for Business, Energy and Industrial Strategy has a central estimate that £ 4.9bn could be lost to fraud through the BBLS, although this could be lowered to about £ 3.3bn, according to a more recent PwC analysis for the government.

Agnew said even the £ 4.9bn estimate could “be a bit low”, however.

He criticized the response to fraud from the Treasury, business department, and the state-owned British Business Bank, which oversaw the loans program.

The BBB needed greater oversight of its operations, including regulation under a body such as the Financial Conduct Authority, Agnew said. He also revealed that the head of fraud at the BBB had recently resigned.

The BBB confirmed that the director for financial crime and fraud had stepped down as a “matter of personal choice”. It said it was “reorganizing and building the team dealing with fraud and financial crime”.

Agnew also criticized Sir Tom Scholar, permanent secretary at the Treasury, who sent a letter sent to the committee “boasting” about 49 arrests of fraudsters when Agnew said the number of potential criminals could be as high as 100,000.

“This is the way they deal with it, they’ll take some trivial little intervention, and list it as a major effort in dealing with the problem,” he told the committee.

He said that the letter “embodies everything about the complacency that grips the civil service”.

The business department said: “We’re continuing to work to crack down on fraud and will not tolerate those that seek to defraud consumers and taxpayers.”