Boris Johnson’s attempt to draw a line under the worst phase of the Covid pandemic was soured on Monday as a fierce cabinet row broke out over the cost of future testing for the disease.

Johnson was forced to postpone a special Covid cabinet meeting with less than 10 minutes’ notice after wrangling continued between the Treasury and the Department of Health over the cost of testing.

The episode saw Rishi Sunak, chancellor, telling Sajid Javid, health secretary, that he had to find about £ 1bn from within the existing NHS budget to pay for testing, government officials said.

Javid argued that he needed to keep spending money to spot future developments in the virus and ensure that Britain never again needed to resort to lockdowns to contain the disease.

With cabinet due to start at 10am on Monday, Johnson was forced to tell ministers at 9.52am that the meeting would have to be postponed while the two sides hammered out their differences.

Finally, Johnson reconvened a virtual cabinet on Monday afternoon before announcing his “living with Covid” strategy for England to the House of Commons at 4.30pm that day.

“Today marks a moment of pride after one of the most difficult periods in our country’s history as we begin to learn to live with Covid,” Johnson said.

With more than 81 per cent of adults in England having received a booster jab and falling cases, Johnson announced the lifting of remaining legal restrictions, while stressing the pandemic was not over. The Queen is currently suffering from the virus.

During the course of last week Javid argued he needed more money than previously allocated to the NHS budget to monitor future developments of the virus, and to allow a response to be scaled up quickly if necessary.

After days of haggling, Javid agreed that he would absorb the costs from within the NHS budget by “reprioritising” spending; Sunak and Johnson demanded assurances it would not hit efforts to cut hospital waiting lists.

The main features of Javid’s plan included continuing the Office for National Statistics Covid surveillance operation and testing of NHS and care home staff, even if they were not displaying Covid symptoms. Genomic sequencing to spot for new mutations would also continue.

Sunak argued that all of this could be funded within the NHS spending review settlement, agreed last year, which from April will also include £ 12bn extra from a rise in national insurance contributions.

Some government insiders claimed Sunak did not want to carry out such extensive Covid testing in the future; others said the chancellor believed the Department of Health was “gold plating” some of its proposals.

“The ONS survey costs £ 250mn a year – that’s a lot to carry out a survey,” said one person close to the negotiations. “Then they wanted some mobile testing vans, which cost £ 700,000 each.”

Earlier on Monday, the UK government announced that over 75s, care home residents and immunosuppressed individuals aged 12 and over will be offered another dose of the Covid-19 vaccine in the spring. 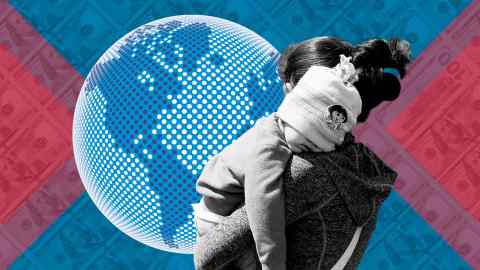 The Joint Committee on Vaccination and Immunization said that an expansion of the vaccine program was needed on a precautionary basis to maintain high levels of immunity among the most vulnerable. The additional dose should be given six months after the previous one, the JCVI added.

The health secretary said he had accepted the recommendations, adding that all four nations across the UK would be following the JCVI advice.

“I have asked the NHS to prepare to offer those eligible a vaccine from around six months after their last dose and they will set out further details in due course,” he said.

“We know immunity to Covid-19 begins to wane over time,” the health secretary added. “That’s why we’re offering a spring booster to those people at higher risk of serious Covid-19 to make sure they maintain a high level of protection.”