The UK automotive industry has urged the government to set binding targets for installing electric vehicle charging points to give motorists the confidence to switch to battery models.

Ministers should also set up a new regulator to oversee the rollout and monitor the network to ensure all parts of the UK have access to chargers, the Society of Motor Manufacturers and Traders said on Wednesday. It suggested naming the watchdog “Ofcharge”.

The call reflects industry concerns that the lack of UK-wide charging infrastructure to match the existing network of petrol stations will hinder take-up and make it hard to hit government targets to phase out vehicles with combustion engines.

The UK plans to bring an end to sales of new petrol and diesel vehicles by 2030, with some hybrids allowed until 2035. Around 12 per cent of new cars sold last year were battery-electric, which require access to charging points, while another 7 per cent were hybrids with optional charging needs.

While the assumption is that most drivers will charge their cars at home, especially if they have driveways, the SMMT warned that public chargers were “critical to consumer confidence” and were relied on by many commercial vehicles, as well as the third of British households that do not have designated off-street parking.

The SMMT laid out its position on the rollout in a seven-point plan ahead of the publication of a government strategy that will set out how ministers envisage expanding the availability of charging points, which is expected in the coming weeks.

The industry also said the mandated targets should include installation “ahead of need” to reassure those thinking about buying an electric vehicle. It would also give the companies managing electricity networks time to ensure the grid was able to cope with the increased demand.

The SMMT acknowledged the UK was making progress, with one rapid charging point for every 32 electric vehicles – one of the highest levels in the world. The country lags behind only China, South Korea and Japan in the global rankings on that measure. 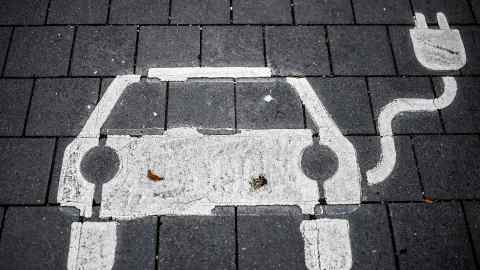 “Delivering this ambition – an ambition that would put the UK ahead of every major market in the world – needs more than automotive investment,” said Mike Hawes, SMMT chief executive. “It needs the commensurate commitment of all other stakeholders, especially the charging industry as surveys show that range of anxiety has been replaced by charging anxiety.”

He said that the billions of pounds invested by carmakers to increase the number of battery cars in their model line-ups needed to be matched by spending on infrastructure.

While a range of companies, including oil and gas majors BP and Shell as well as start-ups, are installing charging stations, there are still areas of the UK without widespread access to public chargers. As part of UK plans for a new “zero emission mandate”, which would oblige carmakers to sell a certain number of electric vehicles, the SMMT said the government should set “binding targets for chargepoint rollout as a condition” of the new rules.

“With clear, equivalent targets and support for operators and local authorities that match consumer needs, the government can ensure the UK has a chargepoint network that makes electric mobility a reality for all, cutting emissions, driving growth and supporting consumers across the UK,” Hawes said.

The government said its upcoming strategy would “set out our vision to create a world-leading charging infrastructure network across the UK” and was already providing £ 1.3bn to support the rollout of chargepoints for homes and business, as well as on residential streets.