The UK government is preparing to sanction hundreds of individuals linked to Vladimir Putin as parliament fast-tracks legislation on Monday designed to crack down on the flow of “dirty money” into the country.

The long-awaited economic crime bill, brought forward on an emergency timetable after the Russian president ordered the invasion of Ukraine, will enable Britain to mirror sanctions already imposed by the EU and US through an urgent designation procedure.

Officials confirmed passing the bill would allow hundreds of individuals to be named as part of a “significant” sanctions package that foreign secretary Liz Truss plans to announce as early as Tuesday.

The bill, which Prime Minister Boris Johnson has said would make it easier for the government to act “harder and faster”, was expected to pass into law on Monday night.

Although ministers have long argued Brexit would allow the UK to act more quickly outside the EU, it has so far imposed fewer sanctions than either Brussels or Washington. The UK has put measures in place against 18 Russian oligarchs since the invasion of Ukraine and on Friday announced action against 386 members of the Russian Duma.

Truss admitted last week that Britain had been “slower” than its allies in imposing sanctions on those with links to Putin, blaming the House of Lords for making relevant legislation more “onerous” after Brexit.

She has said the new legislation would place a cap on potential damages and remove the test of “appropriateness” for designations, which could allow hundreds of individuals to be sanctioned more easily. 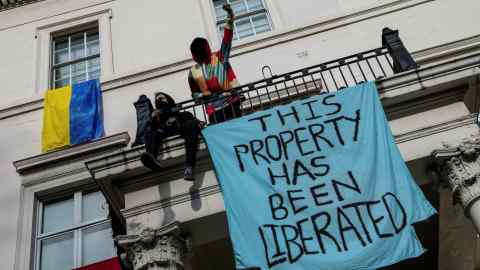 But critics have warned that the new bill contains a series of loopholes. Lord Agnew, the UK’s former counter-fraud minister, has said the creation of a register requiring anonymous foreign property owners to reveal their identities could be bypassed by using a UK nominee. Labor has also complained owners would have six months to comply, giving them time to sell up; they want that period cut to 28 days.

Meanwhile, Michael Gove, the housing secretary, has watered down plans to seize mansions owned by Russian oligarchs and use them to house Ukrainian refugees after lawyers warned the government could face legal challenges.

The FT reported last month that Gove was looking into seizing properties without any financial compensation, a move that would go far beyond the usual system of sanctions under which an individual’s assets are temporarily frozen.

In law, individuals or companies have a “right to property” and any attempt to effectively nationalize it requires the state to pay compensation.

“It will be interesting to see how [ministers] can justify [the plans] if we are not at war. The last time something along these lines was enacted was in 1939, under the Trading with the Enemy Act, ”said Michael O’Kane, a sanctions expert and senior partner at law firm Peters & Peters.

Over the weekend, Gove said his plan no longer involved “permanent confiscation,” explaining: “I want to explore an option that would allow us to use the homes and properties of sanctioned individuals for as long as they are sanctioned for humanitarian and other purposes. . ”

Gove’s plan also ran into complications as officials and ministers haggled over whether it would require an entirely new bill or if it could be slotted into existing legislation.

“I think there have been various discussions across government around some delivery issues, including the question of how quickly it can be delivered given that legislation would be needed,” said one official. “There are also questions about how widely it would actually be used.”