“It is not a job where I think you can say you want to be liked,” Nikhil Rathi told MPs on the parliamentary Treasury select committee in July 2020 during his appointment hearing as the boss of the UK’s Financial Conduct Authority.

Rathi was talking about the unpopularity that comes with overseeing more than 60,000 finance companies in the UK, ranging from Wall Street heavyweights to veterinarians offering credit plans.

The statement has proved prophetic of how the former London Stock Exchange boss is viewed by some of the 4,000 staff he was appointed to lead as he sought to repair the damage done to one of Britain’s main financial watchdogs by the 2019 London Capital & Finance minibond scandal .

Less than 16 months into the job, the anger sparked by Rathi’s plan to transform the regulator has left the FCA facing the prospect of strike action for the first time. Earlier this month, trade union Unite announced that an undisclosed but “significant” number of staff had backed industrial action in an indicative ballot.

Four of the FCA’s top seven executives have left, or signalled that they will leave, since Rathi joined, along with hundreds more below them, leaving the regulator with a staffing crisis as it tries to fill hundreds of newly created roles in areas such as technology and authorizations.

The disquiet at the FCA has filtered through to the industry it oversees. One finance executive said that in 25 years dealing with the watchdog and its predecessor, things have never been as bad. Senior bank executives freely describe the organization as in “chaos”.

“The reputation of the FCA goes hand in hand with its credibility,” said Costanza Russo, deputy dean for research at Queen Mary University of London, adding that it had been “playing catch-up” on a variety of crises since its inception in 2013

But Mel Stride, chair of the Treasury select committee, urged patience. “I think inevitably you’re going to come into some choppier waters, and I think that’s what’s happening,” he told the Financial Times, describing himself as “reasonably optimistic” that Rathi was “on it” and taking the FCA in the right direction.

Some of those working for Rathi who spoke to the FT anonymously disagree. They describe widespread disillusionment at the FCA’s headquarters on the former Olympic site in Stratford, east London, where the agency moved in 2018.

The main flu is the changes to pay. A “career and grading” project, conceived before Rathi took over in October 2020, aims to streamline the FCA’s 10 pay grades and eliminate annual bonuses of about 10 per cent routinely paid to 90 per cent of staff. A consultation began last September, with the changes due to be introduced in April.

Unite said many staff viewed the pay cut as unfair after a grueling pandemic during which they performed “extremely well”, according to Rathi’s own pre-appointment testimony to MPs.

The soaring cost of living has increased anger, while the red hot market for professional staff services has made employees more likely to quit in protest. As the return to office working gains momentum, the prospect of spending more time in Stratford, an unfinished residential area away from the creature comforts of their old home in the business district of Canary Wharf, has also influenced staff thinking.

A report published last week by the FCA’s Staff Consultative Committee (SCC) said 56 per cent of the 1,852 respondents claimed they were considering leaving the regulator because of the changes. Almost half of the respondents said the proposals “would not support the FCA in meeting its regulatory objectives”.

Staff also said they “don’t feel they have had adequate information or time to understand the proposals” and said some key information was given “very late in the process or not at all”.

An FCA spokesperson said the organization had gone “beyond what would normally be expected” in its consultation efforts and was “carefully considering all the feedback we’ve received before we publish our new pay and reward offer early next month”.

“This is a deep and necessary culture change which takes time and may feel uncomfortable for some colleagues and stakeholders,” the FCA added.

One of Rathi’s lieutenants pointed out that as a result of the consultation, the plans had been amended to ensure most of the FCA’s staff received a 5 per cent pay rise in April versus the 4 per cent originally proposed, adding: “We are listening to them, I promise. ” 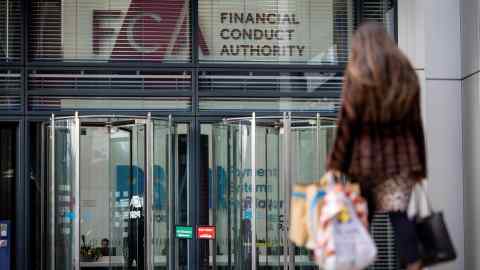 At a board meeting on December 16, Rathi briefed his fellow directors on “efforts to monitor and manage funding gaps” as vacancies mounted, although he insisted attrition remained at pre-pandemic levels.

But the threat of industrial action has raised fresh concerns about the watchdog’s position. “I think he’s got to be very careful that we don’t end up in a situation where the FCA is brought down with lots of strike action, because I think it could result in quite a lot of consumer harm,” Stride said.

The FCA insisted some of the external criticism was due to it “being tougher” on the processes of approving new licenses or registrations of companies and individuals. These authorizations are key to the FCA’s long-promised data-led future.

For example, its “Gateway” project will streamline the way forms are submitted to the FCA by automatically validating data. One FCA executive said this could cut processing time by 30 per cent.

The regulator is also promising to be tougher on enforcement, citing the successful money laundering case against NatWest at the end of last year – its first criminal prosecution of a UK bank under anti-money laundering rules. It has pledged more early oversight of companies and is taking a more active role in seeking new powers.

The FCA says it is tackling its work backlog by bringing in outside help, including about 25 staff from BDO consultancy to help with senior manager regime applications, and 20 from law firm DLA Piper to work on changing control applications.

The FCA executive said the regulator would also advertise about 200 supervision jobs by the end of March.

The unknown is how many more staff will leave between now and then.