The UK government has incurred losses of almost £ 10bn on buying personal protective equipment as it sought to meet unprecedented demand at the height of the coronavirus pandemic.

The figures, revealed in the Department of Health and Social Care’s 2020-21 annual report, show that about £ 4bn of this “impairment” was due to equipment that was either defective, unsuitable or surplus to requirements.

The single largest element of the losses, first reported by ITV News, relates to an adjustment of £ 4.7bn to the year-end valuation of PPE because the market price of equivalent stock was by then lower than the price the government had paid. Together they bring losses to £ 8.7bn out of an overall expenditure of £ 12.1bn on the items.

The government is also writing down a further £ 1.2bn in advance orders held at March 31 last year that could not be canceled even though the government had paid above the current market price. They include items “that cannot be used for their intended purpose” or which will have passed their expiry date before they can be deployed.

The department said in a report that the rapid rise in international infection rates during the early stages of the pandemic had created “unparalleled demand for PPE and resulted in a highly competitive global market where many countries imposed export bans”.

The possibility that contracts might not perform and that supplies were priced at a premium “needed to be balanced against the risk to the health of frontline workers, the NHS and the public if we failed to get the PPE so desperately needed”, the report said. .

The government’s PPE procurement system during the pandemic has been widely criticized. Last month the High Court ruled that ministers acted unlawfully in operating a special VIP lane for potential suppliers who had links with politicians or senior officials.

Labor seized on the impairment figures as proof of government profligacy. Pat McFadden, shadow chief secretary to the Treasury, said: “These levels of waste destroy any claim the Conservatives have to be careful stewards of public finances.”

The disclosure is the latest evidence of a lack of cost control during the health crisis, following the resignation last week of Lord Theodore Agnew, the minister responsible for Whitehall efficiency, who blasted the UK government’s “lamentable track record” on tackling fraud in a flagship state-backed coronavirus business loan scheme.

McFadden added that, along with the government’s “laissez faire attitude to fraud”, the PPE disclosures would be “particularly galling to hard working households wondering how they will pay the higher taxes the chancellor is imposing this April”.

In a critical report on PPE procurement published in November 2020, the National Audit Office, the independent spending watchdog, said that after its normal purchasing structures were overwhelmed in March 2020, the government had paid “very high prices given the very unusual market conditions, and hundreds of millions of pounds-worth of PPE will not be used for the original intended purpose ”. The NAO called for lessons to be learned.

In its annual report, DHSC cast the amount of excess stock, unlikely to be used in the next 18 months, as a result of the “success of the buying operation by the department”. 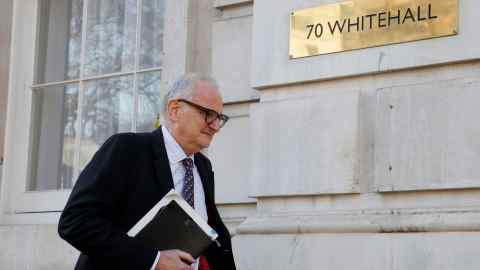 Some had been sold and donated to companies and other countries and further donations, including to the UN, were expected, it said.

However, some would need to be “recycled”, it acknowledged, adding that by April “the expectation is that two lead waste providers will be contracted to begin this process for selected PPE items”.

DHSC said: “In a highly competitive global market where many countries imposed export bans, we acted swiftly to obtain 30,000 ventilators by the end of June 2020 and we have delivered over 17.5bn items of PPE to the frontline, with 97 per cent of PPE we ordered being suitable for use.

“The supply of these vital items helped keep our NHS open at a time of national crisis to deliver a world class service to the public. We are seeking to recover costs from suppliers wherever possible, ”it added.