The UK is looking at a 20-year extension of the Sizewell B nuclear power plant on England’s east coast to 2055 as Boris Johnson aims to bolster domestic energy supplies following Russia’s invasion.

The extension is one of several options under consideration as the prime minister draws up a new “energy supply strategy”, which will be published next week against the backdrop of highly volatile international gas prices and an escalating cost-of-living crisis.

Johnson’s new approach will not see him cut Britain’s carbon targets, including the plan to reach net zero by 2050, and will see an increase in targets for various renewable energy sources, according to officials.

However, it will also seek to improve security of supply of hydrocarbons by increasing North Sea oil and gas production and potentially keeping some of Britain’s few remaining coal-fired power plants open slightly longer than expected – rather than relying on imports.

Johnson held a meeting with executives from the oil and gas industry on Monday morning where he urged them to increase production. “We have been clear with energy companies and suppliers they have a vital role to play,” Downing Street said.

Britain is set to experience a significant loss in nuclear capacity by the end of the decade as EDF of France and the UK’s Centrica, which own all of the current fleet of reactors, have been forced to close several earlier than planned.

EDF’s 1.2 gigawatt Sizewell B plant in Suffolk, which started operating in 1995 and can meet about 3 per cent of UK’s electricity demand, is the only one of Britain’s six remaining atomic power plants that will continue generating beyond the end of the decade. Only one new station, the 3.2GW Hinkley Point C in Somerset, is currently under construction. It is due to come on stream in 2026.

Ministers are encouraging investors to build another new plant on a site adjacent to Sizewell B but are also keen for EDF to invest the estimated £ 500mn- £ 700mn that would be needed to extend the lifetime of the existing station to 2055.

Kwasi Kwarteng, business secretary, visited Sizewell in January, where he met EDF directors and some of the workforce.

Government officials said Kwarteng was supportive towards EDF, which is “actively exploring” a 20-year extension for Sizewell B and is aiming to take a final decision on the project in 2024, for which UK government approval would be required. “It will probably be extended,” said one official. 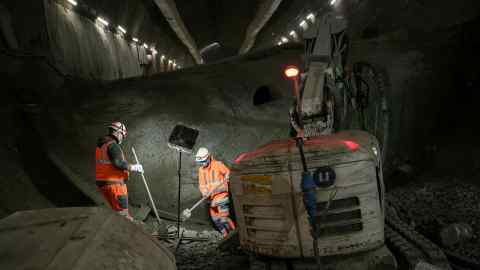 Britain started the decade with just over 9GW of nuclear capacity, which provided about a fifth of the country’s electricity, but that has already dropped by 2GW after EDF was forced to close the 1.1GW Dungeness plant in Kent last summer, seven years ahead of schedule .

Hunterston B in North Ayrshire, which had a capacity of 965 megawatts, closed in January. The 965MW Hinkley Point B plant in Somerset is due to enter decommissioning from July this year.

Energy leaders are also urging the prime minister to fast-track planning processes for clean energy projects and necessary extensions of the electricity grid as part of his strategy.

Keith Anderson, chief executive of Scottish Power, said: “Doubling down on decarbonisation is in the national interest – renewables are already blunting the blow of soaring global gas prices and paying into the UK pot – we now need to turbo charge it.”