Asking prices for UK homes jumped in February, driven by strong demand for property in London and elsewhere and a shortage of housing stock.

The price of homes coming to market rose by £ 7,800 between January and February, climbing to £ 348,800, according to data from Rightmove, the UK’s largest online property portal.

The 2.3 per cent rise marked the largest monthly increase since the company started tracking national prices in 2001.

Tim Bannister, Rightmove’s director of property data, said that “high demand and a shortening of available stock” had supported the asking-price rise.

“As soon as anything new comes on to the market, it is flying off the shelf, with multiple buyers competing for the final sale,” he said.

The housing market is also supported by low borrowing costs. Separate data from the Bank of England reported that the borrowing rate on the outstanding stock of mortgages fell to 2 per cent in December, a record low.

Mortgage rates have remained historically low despite many providers raising them after the Bank of England increased interest rates from 0.1 per cent to 0.25 per cent in December.

Further interest rate hikes are expected this year as the central bank battles with the highest rate of inflation in 30 years.

Asking prices were up 9.5 per cent compared to the same month last year, marking the highest annual growth rate since 2014.

London recorded the biggest jump in inquiries from would-be buyers compared to the rest of the UK. Asking prices in the capital also rose by a monthly rate of 6 per cent, faster than the national average.

Rightmove said the trend reflected the ending of pandemic restrictions in January and people returning to the office in greater numbers after two years in which London’s housing market has underperformed other regions.

Despite the capital’s property market showing signs of improvement, London properties took 68 days to sell on average, according to the data, nearly double the south-west. 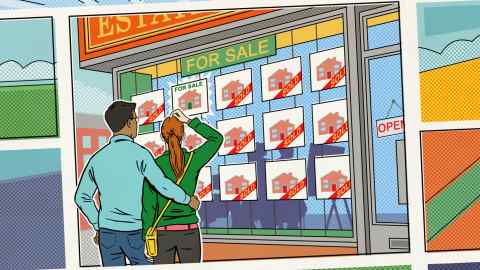 On average, 16 per cent more potential buyers sent inquiries to agents than over the same period last year, while new property listings rose 11 per cent in the month up to mid-February.

Many economists warn that rising interest rates and the cost-of-living crisis will hit the property market this year.

However, despite rising costs and interest rates, Bannister said many people were still “determined” to relocate as the country entered the spring home-moving season.

Rightmove’s data were based on asking prices of properties coming on to the market in the month up to February 12 via more than 13,000 estate agency branches listed on its website.