The government has come under significant pressure to extend its offering to Ukrainian refugees fleeing the Russian invasion ahead of the announcement of its new community resettlement scheme.

As soon as Monday, ministers will ask the public to open their homes to refugees with no family links in the UK as part of a new sponsored refugee route.

However, politicians and human rights groups have said that the new scheme, to be announced by communities secretary Michael Gove, must move faster and be a better funder than its predecessor for Syrian refugees.

Russell Rook, former chair of Reset UK, a program that supports community sponsorship schemes, said the size and urgency of the demands on the scheme were “on a different scale” from those before.

“How do you create a scheme that’s really safe for everybody but at the same time enables us to give help and sanctuary and help them to integrate well into a UK community?” he said.

Politicians from all parties have been fiercely critical of the government’s continued insistence that Ukrainians fleeing Russia’s invasion seek visas before traveling to the UK.

The policy has created desperate scenes at document-processing sites across Europe in the past week, as well as a near-collapse of the system for booking visa appointments.

The UN High Commissioner for Refugees on Friday said a total of 2.5mn people had fled Ukraine, with a total of 1.5mn currently in Poland. The EU has waived visa requirements for Ukrainians for a total of three years.

According to figures released on Wednesday, the UK has so far issued just 1,305 visas to Ukrainian refugees out of more than 20,000 applications.

Prime Minister Boris Johnson said this week that the scheme would allow British people to open their homes to Ukrainians.

The new scheme forms the second leg of the UK’s response to Ukraine’s refugee crisis. The first leg, already launched and overseen by the Home Office, allows people resident in the UK to apply to bring over immediate and extended family members from Ukraine. 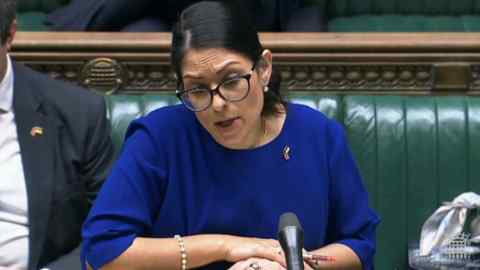 Some migration experts have said the Ukrainian sponsorship scheme will need to be far better funded than previous similar programs.

In its first five years, the Syrian resettlement program rehomed only 500 of a total of 20,000 Syrians who were brought to the UK. A successful scheme for people from all countries, the UK Resettlement Program, accepted 1,125 people last year.

Downing Street on Friday said the Department for Leveling Up, Housing and Communities was “working tirelessly” on the new scheme to “have it up and running as soon as possible”.

People coming to the UK under the sponsorship route will have the right to remain for up to a year and will be allowed to work and receive benefits.

The approach contrasts with that for people fleeing Syria, who were granted refugee status, which confers an indefinite right to remain in the UK.

Enver Solomon, chief executive of the Refugee Council, said it was vital that the new scheme confer refugee status on those arriving. “Creating yet another visa system that only allows them to stay temporarily is not good enough,” he said.

Chris Bryant, the opposition Labor party MP for Rhondda, questioned why the scheme was being prepared only now when UK intelligence had warned well in advance that Russia was planning to attack Ukraine.

“Every single element of this has been mishandled and I’m not convinced that the relevant departments are actually working together properly on this,” he said.