The UK government on Monday resisted pressure to see its program to admit Ukrainian refugees after criticism that the existing route was slow and bureaucratic.

The UK is at present operating a “family reunion” route for Ukrainians fleeing the Russian invasion, which allows admission only to those with family members resident in the UK.

The government has said it will open a second route, which will allow individuals, businesses or charities to sponsor Ukrainian refugees, but has not yet explained how that scheme will work.

There was an outcry following reports on Sunday that the family reunion scheme had granted only “around 50” visas, out of more than 10,000 applications.

Priti Patel, the home secretary, on Monday told the House of Commons that the figure was inaccurate. The Home Office on Monday evening tweeted that it had so far issued 300 visas, and confirmed another 340. A total of 8,900 applications had been submitted, it said.

Unlike the UK, all EU countries have dropped their usual demands for Ukrainians to seek visas before traveling and are offering them three years’ leave to remain.

Yvette Cooper, the UK’s shadow home secretary, called the situation a “total disgrace”. “Desperate Ukrainian families are being turned away and let down in their hour of need,” she said wrote on Twitter. “Home Office needs to get a grip of this fast.”

She also criticized the government over the fate of Ukrainians arriving in Calais en route to the UK, pointing out that one Ukrainian family stuck at the French port was told that the first available appointment to apply for a visa was in Paris on March 15.

“I have to ask the home secretary,‘ What on earth is going on? ’” Cooper said.

Patel told MPs that her department was planning to set up a visa processing center in the vicinity. The Home Office insisted afterwards that there were 400 appointments free in Paris this week, including 100 set aside for Ukrainians.

Steve Valdez-Symonds, director for refugee and migrant rights at the human rights group Amnesty International UK, called the Home Office’s approach “too slow and too bureaucratic”.

“Instead of persisting with its insistence on visas or on sponsorship schemes for traumatized Ukrainians fleeing an active war zone, the UK should be putting in place fast-track refugee arrangements,” he said.

Former health secretary Jeremy Hunt on Monday added his voice to those calling on the government to make it easier for Ukrainians trying to escape the fighting to come to the UK.

In a tweet that included a copy of a letter to Boris Johnson signed by 37 moderate Conservative MPs, he said: “We need to do more to support Ukrainian refugees. . . 1.7 million people have now fled and no one could possibly argue they don’t have a good cause. ”

The government said it was keeping its position under review.

“The routes we have put in place follow extensive engagement with Ukrainian partners,” a spokesperson said. “This is a rapidly moving and complex picture and, as the situation develops, we will continue to keep our support under constant review.” 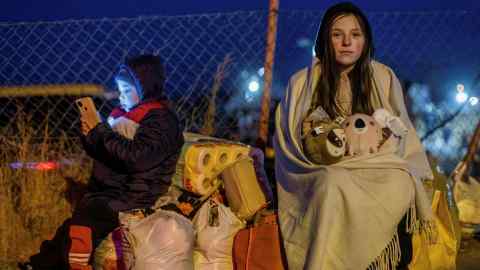 However, Gurpreet Johal, a Glasgow-based immigration solicitor working on applications to help Ukrainians join relatives in the UK, said it was unclear how the system for admitting Ukrainians’ family members was meant to work.

He said that a demand that applicants upload official documents to Home Office websites, complete with official translations into English was impractical for people fleeing a war zone.

“The problem is that applicants must fill out online forms, biometrics have to be enrolled and a decision has to be awaited and received before traveling,” he said. “The EU doesn’t ask any of that upfront.”

Patel has insisted that it is vital the UK maintains its visa regime to ensure refugees coming to the UK face proper security checks.