The government has launched an urgent review into how to reduce Britain’s exposure to Russian gas imports and Kremlin-backed energy companies following the invasion of Ukraine, according to people familiar with the situation.

UK business secretary Kwasi Kwarteng met the bosses of some of the UK’s biggest energy groups on Friday as part of the review, which energy industry leaders said would require a close examination of the ties between Russia’s Gazprom and the public and private sectors in Britain.

National Grid’s John Pettigrew, Chris O’Shea of ​​Centrica and ScottishPower head Keith Anderson were among the chief executives who met Kwarteng, according to people close to the talks.

One of the drivers of the review is a push by ministers to reduce the amount of Russian gas brought into Britain, which accounts for 5 to 6 per cent of overall gas imports.

The probe will also look at the role of Gazprom’s UK-based trading arm, which energy industry executives warned has extensive ties with both companies and public sector bodies.

London-based Gazprom Marketing & Trading (GM&T) is principally a trader of energy products and buys and sells volumes of natural gas, including from the UK’s North Sea. It also has a sizeable retail arm that sells energy directly to industry and businesses.

Local authorities and NHS trusts spent £ 107m on buying gas from Gazprom’s UK arm over the past six years, according to figures collated by Tussell, the procurement data providers.

The UK has so far shied away from sanctions aimed specifically at the energy sector. But some of the world’s largest energy companies have already fled to cut ties with Russia as its military resorted to increasingly brutal tactics, pounding Ukrainian cities and towns with artillery and air strikes.

British Gas-owner Centrica became the latest UK company on Tuesday to seek to distance itself, announcing that it was looking to exit gas supply agreements with Russian companies, principally Gazprom, as a “matter of urgency.” 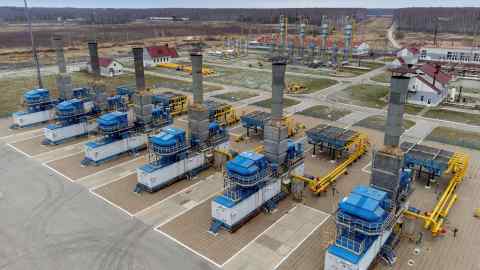 O’Shea said Centrica was “working through the details” of how best to exit its supply agreement with Gazprom, adding that he was “shocked by the unfolding events in Ukraine and the needless loss of lives”. The move followed commitments by both BP and Shell to sever ties with their Russian partners.

Eon UK, Britain’s second-largest energy supplier, said it had “decided to bring an early termination” to a legacy contract it had with GM&T.

Liberal Democrat leader Ed Davey has said the government should help companies “to do the right thing in support of Ukraine” even if it means refusing to honor existing contracts with Russian companies.

But companies could find themselves in breach of contract if they seek to sever agreements with Russian companies that are not covered by UK sanctions. “Companies can’t just say they want to end a contract because it’s politically unpalatable,” one lawyer said.

The UK has floated the idea that all G7 countries should look to adopt a “ceiling” on oil and gas imports. Canada on Monday banned Russian crude oil imports, although its prime minister Justin Trudeau admitted it had bought very little from Russia in recent years.

The UK is far less exposed to Russian imports than most continental European countries, but what it pays for its gas is tied to international markets.

UK Prime Minister Boris Johnson warned this week that British households would have to endure even higher energy bills as the cost of imposing sanctions on Russia. Energy prices have already risen sharply in recent months.

National Grid, Centrica, ScottishPower declined to comment on the meeting with Kwarteng.