Oil spiked as a Russian attack on Ukraine could lead to harsh sanctions from the United States.

Stocks dropped, while investors sought safety in Treasuries as the US warned Russia could take offensive military action against Ukraine as early as next week.

Risk assets added to weekly losses as the UK and US advised citizens to leave Ukraine as tensions with Russia rise. Oil spiked higher as a Russian attack could lead to harsh sanctions from the US Russia has repeatedly rejected charges it plans to invade Ukraine.

The S&P 500 fell 1.9% and the Nasdaq 100 dropped more than 3%, following Thursday’s steep declines amid bets on faster Federal Reserve tightening. Treasuries caught bids, with the 10-year yield sinking 11 basis points to about 1.92%. Oil climbed, with brent crude hitting $ 95 a barrel for the first time since 2014.

For months, the US has warned European allies that Russia may be preparing to invade Ukraine, massing nearly 130,000 troops near the border and staging the largest joint military drills in years in neighboring Belarus. The US has warned of debilitating economic sanctions if Russia attacks, while the Kremlin says NATO expanding further east or deploying weapons in Ukraine are red lines. 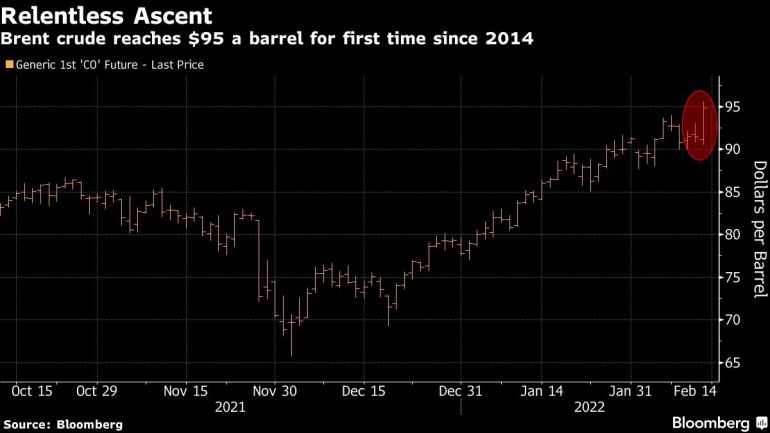 A potential Russian invasion of Ukraine could not only disrupt crude supplies but may also spark retaliatory sanctions by the US Oil prices have soared in recent weeks on speculation that demand will outpace supply as the global economy rebounds from the pandemic.

“The Russia / Ukraine news delivered another body-blow to markets, which were already reeling from stubborn inflation numbers and uber hawkish comments from Fed officials,” Cliff Hodge, chief investment officer for Cornerstone Wealth, wrote in a note. “We may have more downside risk over the coming weeks as markets react to headlines”

Friday’s selloff comes a day after a strong inflation reading and comments from a Federal Reserve official sparked a rout in equities and bonds. Odds increased for faster rate increases, with some traders speculating a hike may come even before the next regularly scheduled meeting in March. Those worries were effectively ended Friday when the Fed signaled it would go ahead with the last of its bond purchases before the program ends next month. The central bank has said it won’t raise until after the buys are over.

Inflation concerns weighed on US consumer sentiment, which declined further in early February to a fresh decade low as views about personal finances deteriorated. The University of Michigan’s sentiment index dropped to 61.7, the lowest since October 2011, from 67.2 in January. Consumers expect an inflation rate of 5% over the next year, up from last month’s reading of 4.9% and the highest since 2008.

“Investors are worried that the economy is also slowing just at the worst time, just as the Fed is about to raise interest rates, which could threaten the health of this expansion and the bull market,” said Sam Stovall, chief investment strategist at CFRA Research. . “Add to it the geopolitical tensions and I think it’s very good reasons why we now have the volatility that we do.”

Here are the main market moves:

–With assistance from Sunil Jagtiani, Akshay Chinchalkar and Robert Brand.