Ukraine plans to become the first developed country to issue its own collection of non-fungible tokens, as it looks to capitalize on a flood of crypto donations to back its war against Russia.

Mykhailo Fedorov, Ukraine’s vice-prime minister, announced the plan in a tweet on Thursday and said Kyiv would reveal details of its NFTs soon.

The move is the latest sign of the Ukrainian government embracing digital assets as a way to fund its armed forces in their battle, and comes after it raised more than $ 270mn in “war bonds”.

Since the conflict began, the official Ukraine Twitter account has appeared for donations in cryptocurrency, publicly posting addresses for people to make transfers to bitcoin, ethereum, solana and polkadot.

Cryptocurrencies totaling more than $ 50mn have been donated to the government, according to an analysis of transactions by Elliptic data company.

The latest move will see the Ukrainian government enter the hype-fueled world of NFTs – collectible tokens that are fixed on the blockchain and so cannot be replicated. Sales of the digital assets surged last year to become a global market worth $ 40bn.

The Ukrainian government had previously announced plans to reward crypto donors with an airdrop, a term used to describe a free transfer of a digital asset, to encourage people to donate.

However, Federov said on Thursday it was canceling these plans and would not be issuing “fungible tokens”. Instead, he confirmed the country would launch NFTs to support the Ukrainian armed forces.

It is unclear what these NFTs will consist of or whether they will be transferred for free or sold in an auction, for additional fundraising.

Ukraine has already disbursed $ 14mn of the cryptocurrency to invest in the conflict, Michael Chobanian, president of Ukraine’s Blockchain Association and a central figure in the fundraising effort, told CoinDesk TV on Tuesday. 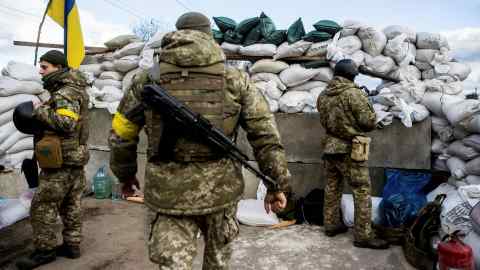 Uniswap, a decentralized cryptocurrency exchange, has also allowed listed tokens on its site to be swapped into ethereum and donated to Ukraine in a single transaction.

An NFT of a pixelated smoking man wearing a blue bandanna and sunglasses from a popular collection called CryptoPunks, worth about $ 200,000, was also sent to Ukraine’s crypto wallet this week.

A decentralized autonomous organization (DAO), backed by Russian activist group Pussy Riot has raised $ 6.6mn through selling an NFT of the Ukrainian flag to a pool of donors.

It comes as the EU is considering measures to ensure that Russia does not use cryptocurrencies to circumvent economic sanctions. The US and UK governments have also raised concerns that cryptocurrency transactions could become a hidden route for moving money to and from Russia.