It was a visit fraught with symbolism – the first time leaders of the EU’s three biggest economies had come to Kyiv since Russia’s invasion of Ukraine. As tokens of solidarity go, it could hardly have been more convincing.

But once the euphoria wore off, some Ukrainians wondered whether the visit of the three leaders, who were also joined by Romania’s president Klaus Iohannis, marked a triumph of ceremony over substance.

Andriy Melnyk, Ukraine’s ambassador to Berlin, summed up the ambivalence. EU membership for Ukraine lay far off in the future, he told Germany’s ZDF TV on Thursday. “But right now what we need is to survive,” he said. “And for that we need heavy weapons.”

Anyone hoping the visit would break the logjam in the delivery of such kit will have been disappointed. The only new pledge came from Macron, who said France would supply six additional Caesar howitzers, on top of the 12 it has already given Ukraine.

There are still no heavy weapons from Germany in use in Ukraine. It’s all about speed – we have no time, we can’t afford to wait

Dmytro Kuleba, the Ukrainian foreign minister, said Kyiv was grateful for the military support it had received so far. But it was “not enough to win the war”, he said. “We need hundreds more multiple rocket launchers, armored vehicles, tanks, drones and ammunition. Every day these decisions are delayed costs us lives. ”

But although there was scant progress on military assistance, Scholz and Macron took the chance to express publicly their unalloyed support for Ukraine and to dispel the impression – widespread in Kyiv and some other capitals – that their commitment was halfhearted.

For Macron it was a chance to lay to rest the accusation from some domestic critics that he is too soft on Russia – a charge that re-emerged earlier this month when he warned the west not to “humiliate” Moscow and stressed the need for dialogue with Russian President Vladimir Putin. In Kyiv he explicitly said Ukraine must “win the war”.

“I think he’s changed the way he approaches this and rejoined the mainstream,” said Michel Duclos, a former French diplomat who is now an adviser to the Montaigne Think-tank Institute.

Danylo Lubkivsky, director of the Kyiv Security Forum think-tank, said: “I hope this visit will have helped Macron and Scholz to understand that their role is not as a mediator between Ukraine and Russia, but to be an ironclad ally of Ukraine. ”

Meanwhile, Scholz received rare praise following the Kyiv trip from German tabloid Bild, which has sniped at him for weeks over his apparent reluctance to visit Kyiv or give Ukraine the weapons it says it needs. Friday’s front page headline read: “At last, chancellor!”, Above a photograph of the German leader and Ukraine’s president Volodymyr Zelenskyy shaking hands.

Draghi had less than Scholz and Macron to prove. The Italian leader has decisively broken with Italy’s traditional pro-Russian tilt and was an early backer of Ukraine’s EU aspirations, pledging Rome’s support for its candidacy in March.

“I realize that this is a little comfort to Ukrainians fighting in the Donbas right now, but the EU. . . put the [bloc’s] credibility on the line for Ukraine’s survival as an independent and viable state, ”he said.

On Friday, the European Commission took the next step and recommended that all EU leaders endorse Ukraine’s candidacy. “We want [the Ukrainians] to live with us the European dream, ”said commission president Ursula von der Leyen.

There is no guarantee EU leaders meeting at a summit in Brussels next week will follow the recommendation. Even if they do, it will be a long haul. The EU’s newest member, Croatia joined the bloc in 2013, nine years after being granted candidate status, while North Macedonia is still waiting 17 years after becoming a candidate country.

In Kyiv, the leaders also discussed a possible new package of sanctions against Russia, which would be the EU’s seventh, and how to tackle the food crisis caused by Russia’s blockade of Ukrainian ports, Ukraine’s foreign minister Kuleba said.

But the issue of weapons continues to loom over relations between Ukraine and its allies. Presidential adviser Mykhailo Podolyak tweeted earlier this month that Ukraine needed 1,000 howitzers, 300 multiple rocket launchers, 500 tanks, 2,000 armored vehicles and 1,000 drones to achieve parity with Russia and “end the war”. The equipment western countries have committed to provide so far falls far short. 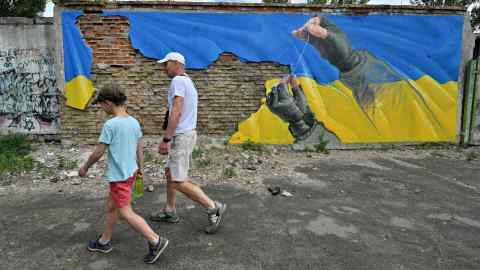 Then Secretary-General Jens Stoltenberg said on Thursday the western defense alliance was drawing up a “comprehensive assistance package” for Kyiv. But he acknowledged there were “challenges” with supplying such a large amount of equipment in a short space of time.

Western officials are trying to manage Ukrainian expectations. “Our discussions with the Ukrainians are:‘ you give us a shopping list, but we need to train you and help you help yourselves ’,” UK defense secretary Ben Wallace said on the sidelines of a NATO meeting on Thursday.

“We’re not directing their war,” he added. “[But] it’s not just about a shopping list. You need the ingredients, the cookbook, to make it into a meal. ”

On Friday, the UK provided some of those ingredients, offering to launch a training program for Ukrainian troops with the potential to train up to 10,000 soldiers every 120 days.

But the western caveats have not convinced some Ukrainian officials, who continue to urge allies – particularly Germany – to step up weapons deliveries.

“There are still no heavy weapons from Germany in use in Ukraine,” Melnyk told ZDF. “It’s all about speed – we have no time, we can’t afford to wait [for] this. ”

Video: Volodymyr Zelenskyy: ‘No one is humiliating Ukraine. They are killing us’