US officials said there was growing “convergence” with the EU on financial sanctions aimed at crippling Russian banks in the event of an invasion of Ukraine, as western countries sought to settle on a package of economic countermeasures to a possible attack.

In a call with reporters on Tuesday, the morning after US President Joe Biden held a videoconference with European leaders to co-ordinate their positions on the crisis, senior US administration officials said they were still hopeful that the threat of devastating economic consequences could deter Vladimir Putin, Russia’s president, from an invasion.

“His tolerance for economic pain may be higher than other leaders. But there is a threshold of pain above which we think his calculus can be influenced, ”said one senior Biden administration official.

US and EU officials have been trying to forge a united front on punitive measures to be imposed on Moscow in the event of an attack, with Washington trying to rally the EU towards the most economically devastating measures.

An EU official said on Tuesday that “further work behind the scenes” was needed to “get absolute clarity on” what the “triggers for sanctions” might be – referring to the nature and scale of the Russian attack that would result in punishment.

But on the substance of the measures, Biden administration officials on Tuesday stressed that there had been a “really encouraging convergence” between the allies, particularly on financial sanctions being contemplated on both sides of the Atlantic.

That alignment focused on “the size of the financial institutions and state-owned enterprises” to be targeted, as well as the “severity” and “immediacy” of the measures, and “the extent to which the prohibitions would affect existing stocks of risk in addition to new flows of financing, ”one US official said.

The White House has publicly backed efforts in Congress to slap sanctions on Russian financial institutions including Sberbank, VTB, Gazprombank and the Russian Direct Investment Fund.

The attempt to find a common position on sanctions came as Emmanuel Macron, the French president, and Olaf Scholz, the German chancellor, were due to meet to co-ordinate the European position on the crisis. It follows moves by the US and NATO to shore up military support for their members in Eastern Europe, including by putting troops on standby for deployment.

UK foreign secretary Liz Truss, who said she would be visiting Ukraine next week, said: “It’s important at this point that we see all of our partners around the world step up. We are leading by example but we want to see others follow that example. ”

As well as financial sanctions, the US and EU are also debating export-control measures to deprive Russia of sensitive technologies and curbs on the country’s energy sector. The US and EU also discussed ways to mitigate the fallout in Europe from the potential loss of Russian energy supplies to the continent.

But even as they prepared to respond to a possible attack, European and US officials were also seeking a common position on diplomatic talks involving US Secretary of State Antony Blinken and Russian Foreign Minister Sergei Lavrov to defuse the crisis. 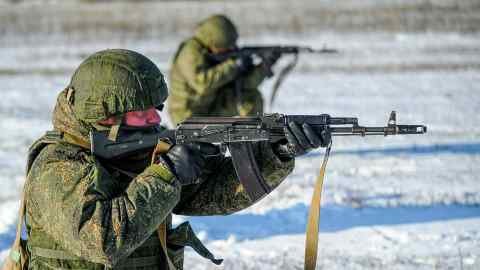 One EU official said there had been extensive co-ordination with the US on written responses to Russia’s security demands that Blinken is expected to deliver to Lavrov in the coming days.

“The full report has been walked through with us in incredible detail on each and every point,” the EU official said. “So I think it offers, if you like, a number of avenues for resolution, for mitigating. The question is whether that is what Russia wants. ”

Dmitry Peskov, Putin’s spokesman, told reporters that Russia would consider its next steps after it received a written US reply to its draft security proposals later this week. He added it was following the US deployments with “great concern”, accusing Washington of “de facto escalating tensions around Ukraine”, according to Interfax.

Russia announced further snap military drills in the western and southern regions near the Ukrainian border on Tuesday, which it said were not connected to the NATO force movements.

The defense ministry released a video footage of the exercises, which included deployments of Islander missile launchers, which are capable of hitting Kyiv, and said 6,000 troops were taking part in the drills in the south.

Russia has deployed more than 106,000 troops and more than 60 battle tactical groups near the Ukrainian border in recent months, including as part of a major joint exercise with Belarus set for February.