Volodymyr Zelensky has urged Ukrainians to fight and “drive the Russians out of our territory” after protests broke out in southern cities that have been occupied in an indication of growing civilian resistance to the invasion.

“The Ukraine that we know, love, and protect will not give up to the enemy,” the Ukrainian president said in a video address on Saturday evening. “It takes a special heroism to protest when your city is occupied, even temporarily.”

Zelensky spoke as Russian President Vladimir Putin’s invasion of Ukraine entered its 11th day. Defense analysts said Russian troops were being confronted by unexpectedly stiff resistance from Ukraine’s military and angry local residents in the cities and towns they had seized.

Some of the protesters marched directly towards Russian soldiers, as gunfire from automatic weapons was heard.

The Financial Times could not independently verify the authenticity of the videos.

Protests have also broken out in the southern cities of Melitopol and Konotop.

“People are driving Russians away from our territory, blocking the roads for them,” Zelensky said. “Every meter of Ukrainian land that is won by protest and humiliation of the invaders is a step towards victory for our entire state.”

Zelensky’s comments followed menacing remarks made earlier on Saturday by Putin, who said that if Ukraine continued “doing what it is doing”, it would raise questions “about the future existence of Ukrainian statehood”.

“And if that happens, it will be entirely on their conscience,” he said at a meeting with Russian air hostesses.

As they pursue their offensive beyond areas they already occupy, Russian troops continue to encircle and attack the strategic south-eastern port of Mariupol, where about 400,000 people are trapped under heavy bombardment. A plan to evacuate residents collapsed on Saturday, after Ukraine accused Russia of violating terms of a ceasefire.

The UK Ministry of Defense said on Sunday that Russia was targeting populated areas in multiple locations, including Kharkiv, Chernihiv and Mariupol. The assault was “an effort to break Ukrainian morals” similar to Moscow’s devastating bombing campaigns in Chechnya in 1999 and Syria in 2016.

But the MoD said Russia continued to be surprised by the “scale and strength of Ukrainian resistance”, adding that the advance of ground forces was being slowed by Ukrainians targeting troops’ supply lines.

The World Health Organization said it had verified six cases of Russian attacks on healthcare facilities that caused “multiple deaths and injuries” and was investigating more reports.

Efforts by western countries to bolster Ukraine’s defenses and isolate Russia have intensified.

The White House has said it is negotiating a deal that would allow Warsaw to supply Poland with Russian-made warplanes and receive F-16 jets from the US.

Ukraine has been clamoring for the creation of a no-fly zone over its territory to block Russian jets and bombardment, a NATO proposition formally rejected on Friday.

Putin said any country that supported a no-fly zone would be a warring party. “Any movement in this direction will be considered by us as participation in armed conflict,” he said. 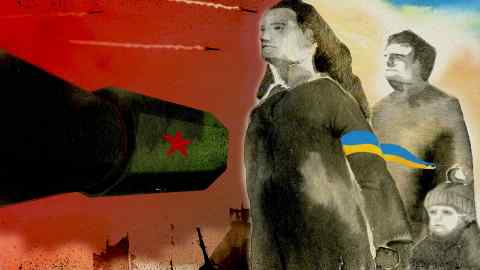 Israeli prime minister Naftali Bennett met Putin in Moscow on Saturday in a diplomatic foray his government said had been co-ordinated with the US.

Antony Blinken, US secretary of state, was in Chisinau, Moldova, one of Ukraine’s neighbors that is bearing the economic and humanitarian brunt of the war, which the UN says has created more than 1.3m refugees.

In Russia, opposition figures called for protests to be held on Sunday across the country. Unverified social media images showed small antiwar gatherings taking place on the central squares of several major cities in the far east of the country and Siberia.