As US President Joe Biden announced his decision to impose a ban on Russian energy imports this week, he reflected on the damage already done to the Russian economy by sanctions since the start of Ukraine’s invasion.

“It has caused the Russian economy to, quite frankly, crater,” he said. “One ruble is now worth less than one American penny.”

By moving to impose sanctions on large Russian banks, key individuals and the central bank, the Biden administration has done more to rapidly inflict economic pain on a large economy and its leaders than any of its recent predecessors.

Nevertheless, it has not exhausted all options for punishing Moscow economically, suggesting more might come if Russian President Vladimir Putin further escalates the conflict. Biden officials have consistently said they are not ruling anything out when it comes to the response to Russia’s war on Ukraine.

Though any additional measures are likely to result in more negative spillover effects on the US economy – and could trigger more tensions with some allies in Europe – which does not mean they are off the table.

“The West needs to keep developing escalatory options for sanctions to keep pace with Putin’s increasing violence,” wrote Brian O’Toole and Daniel Fried of the Atlantic Council, a Washington think-tank, this week. “There is still room for more targeting before these sanctions reach a level comparable to those against Iran or North Korea.”

Shortly after Russia’s invasion, the US imposed hefty sanctions on VTB and Sberbank, two of the most powerful banks in the country, taking direct aim at the motors of the country’s financial system. In a surprisingly bold move, it also sanctioned the central bank to stop it from accessing foreign reserves. But it didn’t go quite as far in other respects.

State-owned Gazprombank and Russian Agricultural Bank have spared the most aggressive sanctions, as Alfa-Bank was privately held – so these are still potentially vulnerable to new measures from Washington. Even though Moscow’s stock exchange has now been closed for days, the US has not sanctioned it directly – a step that would deal another big blow to investments in Russia’s capital markets.

In the past three weeks, the US has slapped sanctions on key Russian officials such as Foreign Minister Sergei Lavrov, Defense Minister Sergei Shoigu, Kremlin spokesperson Dmitry Peskov and Putin himself. 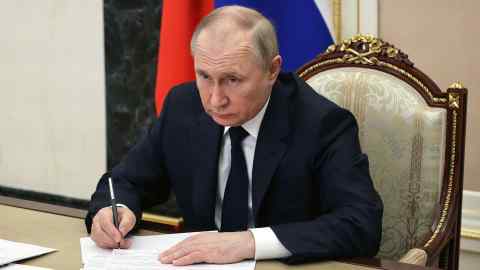 It has also targeted a few oligarchs, from Kirill Dmitriev, head of the Russian Direct Investment Fund, to billionaire financier Alisher Usmanov. The US has also designated family members of some members of Russia’s elite for sanctions.

But America has not sanctioned as many oligarchs as the EU has at this stage, so it has plenty of space to increase its efforts to target Russian business executives and their relatives. It could also expand existing sanctions on Russian oligarchs to include more of their businesses: in the case of Usmanov, some entities linked to him were not part of the first wave of sanctions.

Leading Democratic and Republican lawmakers have been pushing the White House to revoke the US’s normal trading relationship with Russia, which would lead to tariff increases on all Russian imports to the US. Such a move would align Russia with North Korea and Cuba, the only two countries that do not currently enjoy a normal trade status with the US.

According to an analysis by Chad Bown of the Peterson Institute, the removal of the normal trade relationship status would boost the average US tariff on Russian goods from around 3 per cent to around 32 per cent across all goods.

However, the US only imports a relatively small volume of goods from Russia – around $ 16.9bn in 2020, according to US government data. Apart from oil, the largest imports from Russia include precious metals, fish and fertilizer.

Some lawmakers, including the Democratic chair of the powerful Senate finance committee, Ron Wyden, are pushing for the administration to raise tariffs on Russian imports even further – while others want to strip it of World Trade Organization membership – steps that would move the US close to a sweeping embargo on all things Russian.

A potential problem with this strategy is that it could deprive the US of imports from Russia that are less fungible than oil, including critical minerals.

There was a plenty of bluster in Biden’s announcement this week that he would ban Russian oil from entering the US, while stopping Americans from investing in Russia’s energy sector – part of a comprehensive effort to stop financing Putin’s military offensive. But there is more the US could do to hurt Russian oil and gas.

One option would be to impose the harshest sanctions directly on large global Russian energy companies such as Rosneft, which would make it far more difficult for them to do business anywhere in the world. Another step would be to revoke the carve-out for energy payments the US introduced when it sanctioned the Russian central bank.

More broadly, given EU resistance on this front and its own concern about energy price spikes, the US has been reluctant to impose a full regime of secondary sanctions on Russian energy of the kind to which Iran was subjected, which affected its business with countries all around the world.