The White House is about to launch a lightning attempt to replace US Supreme Court Justice Stephen Breyer, who is expected to leave a vacant seat on the court just months before midterm elections that could tilt the balance of power in the Senate.

Joe Biden’s administration is facing pressure to move quickly to ensure they do not lose progressive seats on America’s highest court, which is split 6-3 between conservative and liberal justices.

“This should be a rocket docket for the Biden administration,” said Barbara Perry, Supreme Court and presidency scholar at the University of Virginia, using a judicial term for hearing cases speedily. “They should have all their ducks in a row, they should be ready to go to make the announcement. . . and get it quickly done before we are into the silly season of the midterms. ”

Once a nominee is named, she or he will meet senators before a hearing before the Senate judiciary committee. After the panel votes to advance the nominee, there will be a vote in the full Senate, requiring only a simple majority to pass.

While the midterm elections are 10 months away, it is still a tight timeline for the White House. Court watchers argue political jostling ahead of the polls could shift allegiances, exacerbating the unpredictability in one of Congress’s most politically charged events when the Senate split is already so tight.

“It’s absolutely indispensable that someone be nominated as soon as the resignation makes possible,” said Laurence Tribe, professor emeritus at Harvard Law School.

Breyer, 83, has said he will step down at the end of the court’s current term, which typically wraps up in late June or early July, if his successor has been nominated and confirmed. Biden has vowed to nominate the first black woman to the Supreme Court, although he has yet to name his pick.

How quickly that process happens will largely be up to the Senate’s Democratic leadership, including majority leader Chuck Schumer, although he will have to maintain a delicate balancing act to keep the process from going off the rails.

With the Senate split so narrowly – 50-50, with vice-president Kamala Harris able to cast a tiebreaking vote – Democratic leadership will be banking on the support of their entire caucus in order to successfully confirm a Biden nominee.

At the same time, they will have one eye to the midterms, when a handful of races are likely to determine which party holds control of the upper chamber of Congress for the next two years.

Senior Democrats on Capitol Hill have already vowed to move swiftly to confirm any Biden nominee.

Schumer told reporters on Wednesday that senators “want to get this done as soon as possible.” Dick Durbin, the Democratic senator from Illinois who chairs the Senate judiciary committee, said he “look[ed] forward to moving the president’s nominee expeditiously through the committee. ”

But some Republican lawmakers signaled they were less open to a swift confirmation process.

Lindsey Graham, the Republican senator from South Carolina and former chair of the judiciary committee, said Democrats had the “power” to replace Breyer “without one Republican vote in support”.

Tribe said that the timing of Breyer’s departure could complicate Biden’s efforts to install his preferred candidate, giving Mitch McConnell, the Senate’s top Republican, who blocked confirmation hearings for Merrick Garland in the final year of Barack Obama’s presidency, the chance to make “noises about being too late to confirm a successor ”ahead of midterms.

McConnell on Wednesday said he would comment on Breyer’s retirement when it was formally announced.

All eyes will be on Joe Manchin, the Democratic senator from West Virginia who has often spent to be a thorn in the side of the Biden administration, most recently in his opposition to the president’s ambitious Build Back Better social spending package.

Manchin, who takes a more conservative stance than many of his Democratic counterparts on social issues such as guns and abortion, broke with his party in 2018 to support Donald Trump’s Supreme Court nomination of Brett Kavanaugh.

Democrats, however, could shore up support from a handful of moderate Republican senators, namely Susan Collins of Maine, who is more liberal on abortion issues than many of her colleagues and who wavered on supporting Kavanaugh’s nomination but later voted in favor of his confirmation. She broke with her party, however, in opposing Amy Coney Barrett’s speedy confirmation. 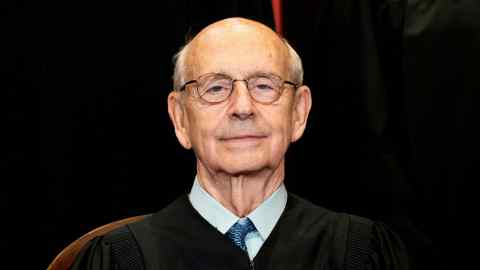 Collins told reporters in Maine on Wednesday that she thought Barrett’s confirmation process – which took just a month from when she was nominated by Donald Trump – was “too compressed”, and urged her colleagues to take their time. “It’s a lifetime appointment, after all,” she said.

Another possible Republican vote of support could come from Lisa Murkowski, the Alaska senator who frequently crosses the political aisle to vote with Democrats and last year joined Collins and Graham in backing Biden’s nomination of Ketanji Brown Jackson, now seen as a frontrunner for the nomination to replace Breyer, to the appeals court for the District of Columbia.

But many Washington insiders argue that Murkowski – who did not immediately comment on the Breyer news – may be reluctant to back a Democratic nominee as she faces a tough primary challenge from Trump-endorsed Republican Kelly Tshibaka later this year. Murkowski voted against two of Obama’s Supreme Court nominees, Sonia Sotomayor and Elena Kagan, in 2009 and 2010, respectively.

Perry said, “Someone like that might have pause if [the confirmation of Breyer’s successor] gets any closer [to midterms]”.