There are few political moments that are as ingrained in the public mind as the view of Neville Chamberlain at Heston Airport, who has just returned from a conference in Munich, waving his piece of paper and declaring that peace with the Nazis has been assured.

Munich has become a byword for cowardice against totalitarian aggression. Chamberlain and atonement are terms of abuse that must be thrown at any effort in diplomacy that one wants to belittle.

Winston Churchill’s analysis of pacification was so widely accepted that all attempts to resurrect his predecessor’s reputation failed. Nowhere is there a politician who invites comparisons to Chamberlain, no conservative leader who seeks to present himself as the new Neville. Even this week, a Tory MP who wants to leave Boris Johnson mocked the prime minister, citing the spirit of a predecessor who famously demanded Chamberlain’s resignation. What it should be is Churchillian, not Chamberlain.

The only Chamberlain the modern Tories want to compare themselves to is Neville’s father, Joseph, and that’s only because most people know nothing about his time as colonial secretary.

Historians have been working for more than 50 years to offer a more nuanced picture of the former prime minister, in which he is not a cowardly leader but a shrewd assessor of Britain’s weakness, playing on as the nation rearm and tries to spare a generation that survived the First World War and the Second Massacre.

Still, there is a small difference. The story of pacification is too visceral. And since the Nazis turned out to be even worse than they looked before the war, no one who is known to have made a deal with them is likely to do well. No matter how much you rely on other qualities, “the search for peace with Hitler” will always appear at the top of your resume.

However, a new redemption attempt appears on our screens with the release of the film Munich: the brink of warbased on the novel by Robert Harris. Harris has long argued that history has done Chamberlain a disservice and wants us to view him as a “tragic hero” rather than a senseless fraud. To that end, he secured the services of Jeremy Irons to inspire the former prime minister with the charisma that the removed and cold-blooded Chamberlain lacked. 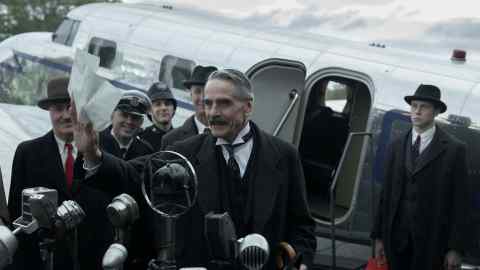 As a accomplished writer, Harris knows the value of the opposite story. His was a good novel and I look forward to watching the film. But there is no going back for Chamberlain. It’s just too useful as it is.

The country, in fact the world, does not want a reassessment of Munich, because this nasty peace deal was not just a historic event. It was an essential moral tale. Munich and atonement are the perfect proof that one can never make deals with evil and that you must always oppose the oppressors, because weakness only encourages them. Since then, he has prayed for help in almost every conflict, even in disasters like Suez. We don’t want some best-selling writer to confuse the story.

Moreover, by the way, and far less modern, is the argument for liberal interventionism. Failure to confront dictators and human rights violations is routinely ridiculed as appeasement. Because what was Munich other than buying temporary peace by selling people and territory to fascist rule? But even those who want to repel Western intervention do not need Chamberlain’s rehabilitation. If we want a warning story, fine, Tony Blair is watching over us.

The world does not want Neville Chamberlain to be brave, charismatic and cunning. He wants it thirsty, cold, vain and selling off the Czechs and the rest of Europe. We like the version of Churchill’s story in which Britain bravely confronts the greatest evil the world has ever seen. In fact, we do not want to be reminded of Chamberlain’s significant achievements before he became Prime Minister. We like to remember our leaders with only one thing. So much the simpler that way.

For Chamberlain to be right, Churchill must have been wrong, and that’s just not the story we’re going to tell. You can choose Daniel Craig or Ryan Reynolds for the role and he defuse unexploded bombs at Buckingham Palace, but he’s not at the forefront of this fight.

I’m for nuances in the story, but this time it will not work. It may be erudite, but introducing shades of gray into perhaps the world’s most Manichean conflict is not only undesirable but useless. The country and the world have a myth and it serves us well, except when it is not.

To quote the end of a famous western: “When a legend becomes a fact, print the legend.” The nation does not need its nuances of Neville and its masterful Munich. Enjoy the movie, but I bet we’ll stick to the legend.