Accusations of cultural appropriation and biased officiating at the Beijing Winter Olympics are provoking indignation and stirring anti-China sentiment in South Korea.

China’s image has taken a battering in South Korea since 2016 when Beijing imposed an unofficial economic blockade on the country after Seoul agreed to buy a US-made missile defense system to counter North Korean threats.

Many South Koreans have also been angered by Beijing’s crackdown on young protesters in Hong Kong, its handling of the coronavirus pandemic and heavy-handed regional diplomacy and a perceived lack of respect for Korea’s distinct history and culture.

Their frustration appeared to boil over during the first week of the Winter Olympics when a woman representing China’s Korean minority wore a traditional Korean hanbok dress while carrying the Communist Chinese flag during the opening ceremony.

Korean viewers were further incensed when two young speed skaters were disqualified from the semi-final of the men’s 1,000m competition, which China eventually won. On Friday, protesters near Beijing’s embassy in Seoul ripped up a Chinese flag.

“The controversies at the Olympics encapsulate the concerns that South Koreans have about China: that it doesn’t respect Korean national identity or autonomy, that it doesn’t share their values ​​and that it doesn’t play by the rules,” J said. James Kim at the Asan Institute for Policy Studies in Seoul.

“This has calcified hostility and mistrust that has been building for years.”

According to a survey conducted last year by Hankook Research and news magazine SisaIN, South Koreans see China less favorably than they do both Japan, which engaged in a brutal occupation of Korea in the first half of the 20th century, and North Korea, which continues to test nuclear-capable missiles that threaten its destruction.

China was labeled as “close to evil” by 58.1 per cent of the survey’s participants, with just 4.5 per cent saying it was “close to good”. According to the Pew Research Center, 75 per cent of South Koreans had an unfavorable view of China in mid-2020, compared with 37 per cent in 2015.

“We are living in an era of growing competition – not just great power competition between the US and China, but competition over political values ​​as well,” Kim said.

“Older Koreans who grew up during the Cold War are lining up behind the US, while young South Koreans who have grown up in a liberal democracy can see how different the Chinese authoritarian system really is.”

The forceful anti-China sentiment expressed by many Koreans is at odds with the approach of successful governments in Seoul, which have tried to avoid provoking the country’s closest economic partner and a powerful stakeholder in the security of the divided Korean peninsula.

Even before the controversies at the Winter Olympics, however, China was a prominent issue in campaigning ahead of next month’s presidential election.

Yoon Suk-yeol, the candidate of the opposition conservative People Power party, has pledged a harder line against Beijing, promising “strategic clarity” on aligning more closely with the US and defending “universal values” such as liberal democracy and human rights.

Lee Jun-seok, the 36-year-old PPP chair who is widely seen representing the views of young South Korean conservatives, said his generation was obliged to fight the “enemies of democracy”, having witnessed Beijing’s “cruelty” while suppressing protests in Hong Kong.

The furore over the Olympics has put pressure on the more conciliatory line of Lee Jae-myung, the leftwing candidate of the ruling Democratic Party, whose middle-aged base wants to maintain pragmatic economic engagement with China.

Lee argued that “any thinking that we have to choose between [the US and China] is a very disgraceful approach ”.

Critics have argued that by trying to portray Lee and Moon Jae-in, South Korea’s president, as sympathizers of China and North, the Yoon campaign has crossed into vitriol. 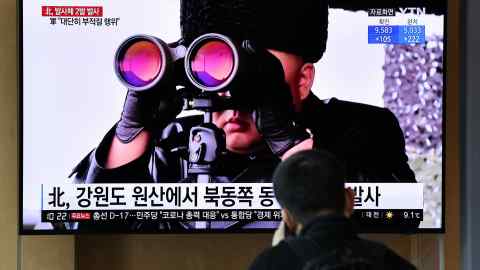 Last month, Yoon posted a picture on Instagram of himself shopping for groceries, with the contents of his trolley spelling out: “Destroy Moon and Exterminate Communists”.

The post echoed provocative statements on social media by Chung Yong-jin, the heir to the Shinsegae retail empire, including a post with the “Exterminate Communists” slogan slogan accompanying a picture of Chinese leader Xi Jinping and a screenshot of a newspaper article complaining of Seoul’s failure to stand up to Beijing.

Beijing’s response to South Korea’s 2016 decision to deploy the Terminal High Altitude Area Defense missile defense system, or Thaad, led to a 70 per cent drop in visits from Chinese tourists, while Korean Lotte Group, which hosts the missile defense system on one of its golf courses, was forced to close 87 of its 99 supermarkets in China.

“In the past, we thought we could co-operate with China – they are our neighbor, a country with which we have many things to exchange,” said Koo Jeong-woo, a sociology professor at Sungkyunkwan University in Seoul.

“But China treats Korean culture as if it is its own, while young Koreans have clearly witnessed its totalitarian tendencies, especially in Hong Kong and Taiwan. People have got to see the real face of a typical communist state. ”