Panic buying has gripped the Chinese capital as local Covid-19 cases rise and residents brace for a Shanghai-style lockdown.

Beijing reported just 41 cases on Saturday and Sunday, but city health officials called the situation “grave” as evidence emerged of days-long community spread of coronavirus. Health officials said the Omicron variant was spreading through different transmission chains and ordered several neighborhoods to lock down on Monday.

At one grocery store in central Beijing more than 100 people queued to enter the store.

“I’m hoarding rationally. . . there’s no harm in being prepared, ”said Shi Wei, a 32-year-old hospitality worker in the city.

“My colleagues in Shanghai learned the lesson the hard way – they are strongly urging I hoard as much as possible, at least a month’s worth of supplies,” she said. “Don’t count on being lucky, it’s better to depend on yourself.”

The growing unease spreads to markets in Shanghai and Shenzhen, where equities sold off sharply on the prospect of widening lockdowns. The benchmark CSI 300 index of mainland-listed stocks closed down 4.9 per cent, while Hong Kong’s Hang Seng fell 3.7 per cent.

Shoppers rushed to hoard supplies after the city’s largest district Chaoyang, with a population of 3.5mn, ordered residents to undergo three rounds of Covid-19 testing from Monday. Chaoyang is also Beijing’s main commercial area, popular with multinational corporations and home to dozens of embassies.

It is common for residential compounds where positive cases are found to be quarantined for at least two weeks. Such micro-lockdowns have occurred sporadically in Beijing over recent months. Mass testing, however, suggests that lockdowns will be more widespread, especially if extended to other districts.

Xue Ce, a 28-year-old tech worker, was one of dozens who joined a block-long queue at a testing center in the district. “I’m here because the Chaoyang government has ordered mandatory tests [and] also because there’s a surge in cases now so I want to be tested just to be safe, ”he said.

Across the country, the number of reported Covid cases remained high on Sunday, with Shanghai contributing 19,455 infections to a total of 20,194. The number of confirmed cases in Jiangxi and Heilongjiang provinces grew 10-fold in the past week. Jiangsu, home to Apple’s big suppliers, reported 840 cases over the week, the highest weekly toll after Shanghai and Jilin province.

China’s financial hub has endured more than three weeks of a harsh lockdown with no end in sight. Over the weekend, workers in hazmat suits installed tall green fences at the bottom of some apartment buildings with a recent history of cases to prevent residents from leaving.

The dire situation in Shanghai, where food remains scarce and prices have rocketed, has spurred panic buying across China with any rise in local cases. 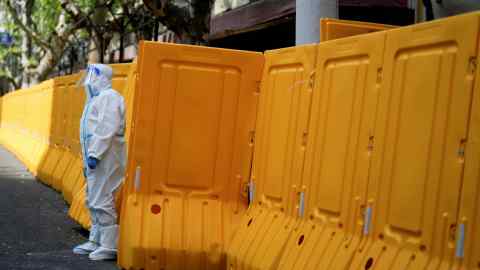 The lockdowns have dented the country’s economic prospects since mid-March, when restrictions in Jilin province were extended to dozens of cities. Shanghai’s measures began with targeted quarantines of relatively small areas before being applied to the rest of the city to facilitate mass testing.

Despite the chaos and economic hardship stemming from the restrictions, President Xi Jinping has shown no indication of relaxing his zero-Covid campaign.

“We will not waver in pursuit of dynamic zero Covid,” Liang Wannian, a Covid-19 government adviser, told state media. “It maximizes the safety of people’s lives and economic and social development.”