Boris Johnson insisted on Monday that Chancellor Rishi Sunak was “absolutely” loyal to his leadership, as ministers said a “fragile truce” had been brokered with Tory MPs following an overhaul of Number 10.

The prime minister’s appointment of Cabinet Office minister Steve Barclay as Downing Street chief of staff and close ally Andrew Griffith as head of policy bought Johnson a reprieve, with Conservative MPs saying they would wait to see if the new team brought much needed stability.

But Johnson’s claim that Sir Keir Starmer had, as director of public prosecutions, failed to prosecute paedophile Jimmy Savile came to the fore again as anti-lockdown protesters hounded the Labor leader outside parliament. Footage on social media showed Starmer heckled with shouts of “protecting paedophiles” and “traitor”.

Johnson backtracked from the claim last week, but Conservative and Labor MPs on Monday linked the prime minister’s original comments to the protesters. Former Tory Minister Julian Smith said: “What happened to Keir Starmer tonight outside parliament is appalling. It is really important for our democracy and for his security that the false Savile slurs made against him are withdrawn in full. ”

Johnson’s leadership has been plunged into crisis over Downing Street parties during coronavirus lockdowns, and MPs have demanded an overhaul of his Number 10 operation because many believe it is dysfunctional. 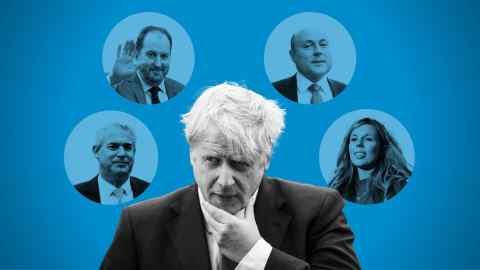 Sunak, widely seen as a future Tory leader, last week criticized Johnson by saying he would not have made the same comments as the prime minister about Starmer and Savile.

Speaking to reporters on Monday, Johnson was asked if he doubted Sunak’s loyalty. “Absolutely not,” he responded, as he outlined the government’s efforts to tackle a record backlog of outstanding hospital treatment in England.

“Everybody in Number 10 and the Treasury are working together in harmony to deal with the big problems that the country faces and clearing the Covid backlogs.”

Meanwhile one cabinet minister said that the new Number 10 appointments including Barclay and Griffith had bought Johnson some time, adding: “We now have a fragile truce. People are giving the new team the benefit of doubt and time to settle in. ”

Another member of the government said the mood among Tory MPs “feels calm”.

Johnson is expected to complete a reset of his government following the partygate scandal via a mini-cabinet reshuffle.

Government insiders said Johnson had decided to replace Conservative chief whip Mark Spencer, although the prime minister did not yet have a successor in mind.

One senior Tory official suggested that Jacob Rees-Mogg, leader of the House of Commons, could move to a new role as Brexit opportunities minister.

This could allow Spencer to become the leader of the Commons and enable the appointment of a new Tory chief whip, but other people briefed on the reshuffle plan said the situation was “fluid”.

No Conservative MPs went public on Monday to say they had written letters demanding a vote of no confidence in Johnson to Sir Graham Brady, chair of the 1922 committee of backbench Tories.

However, the prime minister’s allies said they thought the number of letters was gradually heading towards the threshold of 54 which would trigger such a vote.

One Eurosceptic cabinet minister said there was “no doubt that people are co-ordinating” in a plot against Johnson, with a steady drip of letters being submitted to Brady.

Tory Brexiters pointed the finger at the “Remain tendency” at the party, although recent calls for Johnson to quit have also come from prominent Leavers including former Minister David Davis and backbencher Andrew Bridgen. One former minister and Remainer said the claims were “absolute rubbish”.