The EU’s top court has dismissed Poland and Hungary’s legal challenge to the bloc’s rules, opening the way for Brussels to withhold funding from member states for violations of the rule of law.

The European Court of Justice found that the new rule of law conditionality mechanism, which seeks to protect the EU budget from violations by member states, was legally solid and compatible with the union’s treaties. The decision will allow the European Commission to begin procedures within weeks, leading to the imposition of penalties.

Wednesday’s ruling is the latest development in an increasingly fraught stand-off over the rule of law. The EU is mired in multiple disputes with member states over respect for its founding principles including judicial independence.

The conditionality mechanism was agreed by the EU in 2020 as part of the budget deal that brought in the bloc’s € 800bn coronavirus recovery fund. Poland and Hungary challenged the legislation in the EU court, demanding the rules be annulled on the basis that they were not compatible with the treaty and breached principles of legal certainty.

The mechanism allows the commission to hold back EU funding where necessary to protect it from misuse resulting from the rule of law violations. EU officials have examined cases against a number of member states in the past year, but Hungary and Poland are seen as the most likely initial targets.

The ECJ said on Wednesday it “dismisses the actions brought by Hungary and Poland in their entirety”. The new law, it found, “respects in particular the limits of the powers conferred on the European Union and the principle of legal certainty”.

Ursula von der Leyen, the commission president, said officials would analyze the court decision before adopting guidelines in the coming weeks covering how to apply the mechanism in practice. The commission, she added, was assessing certain cases “in depth” and would “act with determination” when the conditions in the regulation were met.

Hungary is considered in Brussels as presenting the most clear-cut case for action. Budapest is in the line of fire because of weaknesses in the country’s procurement rules that have stoked concern over corruption linked to the dispersal of EU funds.

The key concern regarding Poland revolves around judicial independence and on its disciplinary chamber for judges, which the ECJ has found to be illegal. The Polish constitutional court in October intensified the dispute with the EU over judicial values ​​after finding that parts of EU law were not compatible with the country’s constitution. 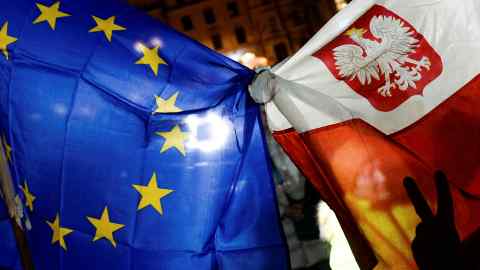 The commission laid out its concerns in informal letters to Budapest and Warsaw in November, in a preliminary step that pointed the way to formal action once the ECJ ruling was given.

Any commission action would come at a delicate time. Hungary holds elections in April, and Brussels is wary of opening a public battle over funding with prime minister Viktor Orban as campaigning ramps up.

Orban, who has spent much of his three consecutive terms in office at odds with the EU, said in a speech on Saturday that Brussels was using the rule of law as “a tool with which they can mold us in their image”. He added: “They are now fighting. . . a rule-of-law jihad. ”

Poland has been making overtures aimed at settling its dispute with the EU over judicial independence. President Andrzej Duda this month put forward a bill to overhaul the disciplinary system for judges, and the ruling Law and Justice party later put forward his own ideas.

“This court decision is crystal clear: the rule of law mechanism is lawful and stands ready to be applied by the European Commission,” said Katalin Cseh, a Hungarian MEP from the liberal Renew Europe group. “The commission should waste no second more, and apply the mechanism.”