Emmanuel Macron has formally launched his campaign for re-election as French president with a promise of further tax cuts and more investment in new industries, as Europe confronts the implications of Russia’s invasion of Ukraine.

“For the past five years, we have faced a number of trials: terrorism, pandemic, the return of violence, war in Europe,” he wrote in a letter to the French people published in regional newspapers ahead of the Friday evening deadline. “Rarely has France been confronted with such an accumulation of crises.”

Macron, who is ahead in the polls opinion and is currently predicted to beat his main rivals in the two-round election in April, made a deliberately low-key campaign launch.

A large public meeting planned for Marseille this weekend to jump-start his candidacy was postponed as Macron pursues a frenzied round of telephone diplomacy designed to convince Russian President Vladimir Putin to halt his attack on neighboring Ukraine.

The centrist Macron, who swept aside the traditional parties of the left and right to win the 2017 election, outlined a platform for a second term that suggested he would continue to pursue the economic reforms he began in his first five years.

They are designed to promote investment in new sectors of the economy such as electric vehicle batteries, ease the bureaucratic and tax burdens on businesses and provide incentives for people to work rather than rely on France’s generous social security system.

“There is no independence without economic strength,” he wrote. “We will therefore have to work harder and pursue the tax cuts that weigh on labor and production.” 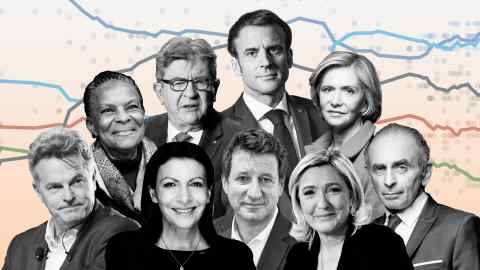 Macron’s view of the need for Europe to strengthen its economic and strategic sovereignty in the face of rival superpowers has been strengthened by the events of the past week in Ukraine and Russia as well as by the impact of the Covid-19 pandemic on global supply chains .

In his letter, Macron boasted that his administration had started to create new industrial jobs after a long decline, cut unemployment to its lowest level for 15 years, as well as reduced taxes and – before the pandemic – public sector deficits.

“All that has given us credibility and allowed us to convince our neighbors to start building a powerful Europe, capable of defending itself and changing the course of history,” he wrote in a nod to Germany’s dramatic announcements of much higher defense spending and a more robust foreign policy.

France at present holds the rotating presidency of the 27-nation EU which has, along with its allies, imposed harsh economic sanctions on Russia and Putin’s associates. Western Europe, heavily dependent on Russia for natural gas supplies, is bracing itself for the economic impact of higher energy prices and logistics problems for the industry.

The Ukraine war has overshadowed the election campaigns of Macron’s rivals who include Marine Le Pen and Eric Zemmour, the two far-right candidates who were sympathetic to Putin before the war and had focused on what they saw as the threat from Muslim immigration. Also in the running are Valérie Pécresse, the conservative candidate, and Jean-Luc Mélenchon from the far left.