Filled with ethereal fairies and magical animals, evil stepmothers and beastly creatures – not to mention the odd wicked woman living in a gingerbread house – fantastic and frightening fairytales continue to enchant. Children like stories about cannibalism, as Margaret Atwood once noted. Constantly retold and reimagined, they’ve morphed from centuries-old spoken folk tales to the written works of the Brothers Grimm; from Disney to Angela Carter to a new Kengo Kuma-designed museum in Denmark, based around the stories of Hans Christian Andersen.

“I’ve made work based on Korean fairytales as well as European ones, and they are all similar. There’s almost always a beautiful young maiden who transforms into an old hag, ”says London-based ceramic artist Claire Partington. “It’s nice to have a bit of escapism. They’re also easy to relate to; it’s really a common language across cultures. ”

Partington’s current show (on until March 19) at Winston Wächter gallery in Seattle chimes with the release of a new monograph of her work, Historical Fiction (published by Amsterdam gallery KochxBos), which shows how her sculptural practice began as literal translations of fairytales and grew into modern mythologies. Her classical porcelain figurines (from £ 10,000 to £ 16,000) feature folkloric elements but also popular-culture references; a golden-haired, golden-winged fairy becomes The Bachelorette (2021), sprawled on the floor next to beer bottles, wearing a body-con minidress and flip-flops.

I’m inspired by Goya. But also the reviews for scary movies

In her latest body of work, a pair of figures reference the Grimm tale Brother and Sister (which was adapted from a Russian folk story); they combine blue-and-white Delft-like patterns with elaborate Georgian dress, as well as interchangeable animal and human heads. “It’s a story about transformation and metamorphosis, like, ‘Don’t drink the water, you’ll turn into a salmon.’ Or, ‘Don’t touch that, you’ll turn into a fox,’ ‘says Partington. “The children have bear heads, but cutesy Care Bear ones.”

More rustic – but equally rich in symbolism – is the ceramic work of Kathy Ruttenberg, which will be shown across Lyles & King’s three New York spaces from 19 March. Whimsical ceramic sculptures, both miniature and monumental, reflect her own woodland setting: a leafy and remote corner of Ulster County in upstate New York, which she shares with a menagerie of animals. “Every day is like a Grimm’s fairytale around here; it’s not fantasy, it’s reality, ”she laughs. “The pigs are here in the studio with me at the moment.” As well as four Vietnamese pot-bellied pigs – named Trixie, Sir Francis Bacon, Oola and Boris – there are goats, peacocks, Angora rabbits, cats, dogs and horses. “It’s all a big installation,” she says of her setup. “I think it’s both escapism and life manipulation. I’m creating my own film right here. I’m the director. ”

Ruttenberg’s visual narratives almost always center on a figure: a woman sprouting branches for hair, roosted upon by a flock of birds; a man with the head of a stag nestling up to a tree trunk that has legs – and high heels on. “[Ruttenberg] collapses the hierarchy between humans, animals and the natural world entirely, ”says Lyles & King director Isaac Lyles.

In the new show, titled Sunshine at Midnight, fairytale motifs take on a modern urgency. In the meter-high Humanity Needs a Miracle (2020), a girl stares up at an angelic figure atop a leafless tree, while a fawn and an owl stand sentry; in a smaller piece called The Sky Fell (2020), she gazes down at the sun upon charred ground. “Sometimes I just want to wrap myself in a tree,” says Ruttenberg. “Some days I feel like my way of life is insane, but other days it just flows. I feel very connected to the earth. And it’s beautiful. ”

Artist Klara Kristalova’s home in rural Norrtälje, Sweden, also strikes a fairytale tone. “Living here, I meet more deer than people,” says the Czech-born artist. “It’s not always fun – it can be super-boring, in fact – but it’s good for my art. I am inside the work all the time. ” Her garden has become a makeshift gallery for her rather sinister stoneware sculptures – figures with horse heads or busts with long tangled black hair, their faces speckled in moths. “My work is mainly about life situations and psychology,” she adds, “but I use fairytales on the side. I like their playfulness. In my work, that and humor are very important. I have a very black sense of humor. I’m very inspired by Goya. But also the reviews for scary movies. ” She refers to her work as a frozen film still: a scene where something is about to happen. Something strange and unexpected. Perhaps something horrific. “But you have to imagine it yourself.”

For Kristalova’s next show – at Norrtälje Konsthall in May; moving to Perrotin in New York in September – her interest in transformation has shifted from adolescence to later life. “The role of older women is very strange and vague,” she says, adding that she’s currently working on a weathervane to be installed in the French port town of Le Havre, which will center on a sea witch – “a big scary figure ”- surrounded by sea creatures.

But it’s not only sculpture that is having a mythical moment. The woodcut prints and paintings by Cologne-based twin brothers Gert and Uwe Tobias are “influenced by their Romanian heritage and the area’s local myths, costumes, handcrafts and vernacular motifs,” says gallerist Rodolphe Janssen. They depict flying creatures, figures or floral motifs, floating in a gauzy yet jewel-toned world that is imbued with the atmosphere of fairytales rather than specific stories. “Like fairytales, some of our work exists in a place and time that is indefinite, a parallel world,” says Gert, as they prepare for a solo show of large-format woodcuts at Contemporary Fine Arts Berlin from March 4. “The irrational, the fantastic, are other things in common.”

Just as colorful and mysterious are the paintings of Indian artist Raqib Shaw, whose work will be shown at the Dries Van Noten project space in LA from 16 February to 26 March. Bringing together stories and symbolism from east and west, Shaw’s opulent, otherworldly landscapes (POA, from Pace Gallery) often hark back to his childhood in Kashmir. Recalling the work of Hieronymus Bosch, the busy scenes are populated with anthropomorphic beings and painstakingly wrought in enamel and metallic paints.

“As a child, I found great comfort in fairy stories,” says Shaw. “I started living in a fantasy world that I created in my head and could transform the most mundane surroundings to a magical land the moment I closed my eyes.” A beloved copy of the Giant Book of Fairy Tales, published by Hamlyn, often appears in his paintings, including one in progress for a solo presentation opening on 20 April at Ca ‘Pesaro Museum in Venice. “I have always used fairy stories as metaphors to illustrate and record my own experiences,” he explains. 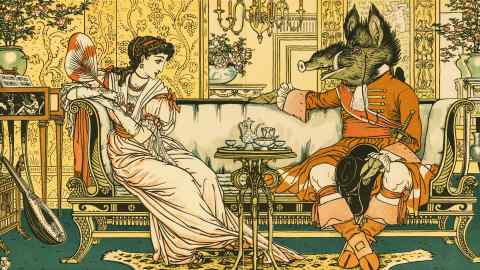 Like Ruttenberg and Kristalova, Shaw has surrounded himself with an evocative landscape to create his work; but in his case the setting is a former sausage factory in Peckham. Nonetheless, the lush planting, including a collection of Bonsai trees, is magical, with water babbling over an alpine rockery he built in 2020. This feature was incorporated into a series of self-portraits in which Shaw appears blending into the foliage swathed in a Uchikake kimono, or a painting of a bespectacled hare gardening in wellies. “Almost all the paintings for my next show are set within the rockery,” he says. “It’s a bubble of refuge from the tragic world outside the studio.”