Johnson & Johnson said it was negotiating partnership deals with two Chinese companies as it taps into a biotech boom in the country driven by a surge in private investment and government support, according to a senior executive.

The talks with the two companies, which J&J declined to name, follow the US drugmaker’s successful collaboration with Legend Biotech, a company founded in China in 2014 but now headquartered in New Jersey. The companies worked together on a breakthrough cell-based cancer therapy that was approved by US regulators last week.

Several other large US pharma groups, including Eli Lilly, AbbVie and Amgen have clinched similar agreements over the past two years as western drugmakers increasingly seek to license high-potential therapies from Chinese partners to sell in other markets.

Peter Lebowitz, head of J & J’s global oncology division, told the Financial Times that “before 2015, in the early days”, Chinese biotech companies were focused on formulating “slightly better versions of existing” drugs, adding: “Now though, in China there is true innovation. ”

“We are always looking for opportunities in China but there are a couple now that we are really going to push to close in on potential deals,” he said.

Western drugmakers clinched a dozen major licensing deals with Chinese biotechs carrying a median deal value of $ 900mn between July 2020 and July 2021, according to McKinsey, the management consultancy.

The market value of listed biopharma groups from China on the Hong Kong, Shanghai and Nasdaq exchanges has surged from $ 3bn in 2016 to $ 240bn today, McKinsey said – despite a sharp correction in global biotech stocks in 2021.

Bruce Liu, who leads the life sciences division for China at the consultancy firm Simon-Kucher & Partners, said the country’s central role in the drug supply chain – it produces around one-third of the world’s active pharmaceutical ingredients – has helped it forge a new role as an innovative drug hub.

Beijing has offered incentives for Chinese scientists to return to support domestic businesses, Liu said. Meanwhile, a change in listing rules at the Hong Kong Exchange in 2018 – which allowed pharma companies without revenue to access public capital – had led to an “explosion” in biotech investment, he added.

Western drugmakers have pivoted towards China despite geopolitical tensions, logistical hurdles caused by Covid-19 and concerns expressed by US regulators over the quality of some drug approval applications that rely solely on China-based clinical trials.

Last month a US Food and Drug Administration committee voted against recommending approval of a lung cancer treatment developed by Innovent Biologics and Eli Lilly because the trial was conducted in China on a population that is less racially diverse than in the US.

Ying Huang, Legend Biotech chief executive, said the FDA wanted to ensure clinical trial data was appropriate for the US population. He said J&J and Legend had consulted extensively with the FDA for its trials, which initially took place in China but later expanded to the US and Japan.

“We are proud to be the trailblazer to bring some breakthrough science discovery in China and develop that in the US,” Huang said.

He said a surging investment in the Chinese biotech sector is generating scientific breakthroughs and opportunities for expansion to the US, the world’s largest market for pharmaceuticals. 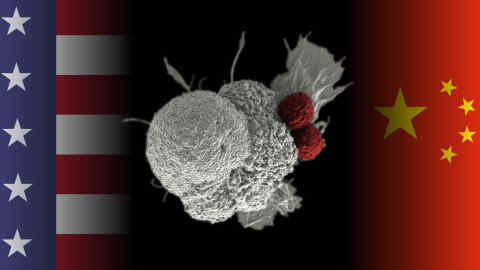 The J & J / Legend treatment, Carvykti, is a Car-T therapy, which works by extracting a patient’s blood cells, re-engineering them in a lab so they can identify and destroy cancer and then reinserting them into the body.

China is conducting more clinical trials in the Car-T field than any other country, with 492 registered studies, compared with 362 in the US and 274 in Europe, according to a database compiled by Beacon Targeted Therapies.

He expects Chinese pharma companies to produce other types of innovative drugs that tackle other health problems that disproportionately affect the country’s domestic population such as cardiovascular disease.

Bruce Levine, a professor of cancer gene therapy at the University of Pennsylvania, said the pace at which Chinese-discovered therapies entered the US market would depend on clinical trial conduct and when stringent Covid-19 restrictions are lifted.

“In the US we have an established regulatory authority and we have quality standards. In China there are some very good hospitals. . . and then there’s a lot of hospitals that are not so good. They don’t keep track of their patients, ”he said.