Speaking in Warsaw, the US vice president also supports an international investigation into possible Russian war crimes in Ukraine.

US Vice President Kamala Harris has stressed that the United States and Poland are “united” on policy towards Ukraine during the Russian invasion after Washington rejected an offer by Warsaw to transfer its MiG-29 through an American airbase in Germany.

Harris told reporters at a joint news conference with Polish President Andrzej Duda in Warsaw on Thursday that US military and humanitarian assistance to Ukraine is an “ongoing process”.

“I want to be very clear: the United States and Poland are united in what we have done and are prepared to do to help Ukraine and the people of Ukraine, full stop,” she said.

Earlier this week, officials in Washington rejected a public Polish proposal to help deliver the Russian-made MiGs to Ukraine, saying the move risked escalation with Moscow.

“Polish generosity is clearly on display for the whole world to see,” Pentagon spokesperson John Kirby said on Wednesday. “But at this time, we believe that the provision of additional fighter aircraft provides slightly increased capabilities at high risk.” 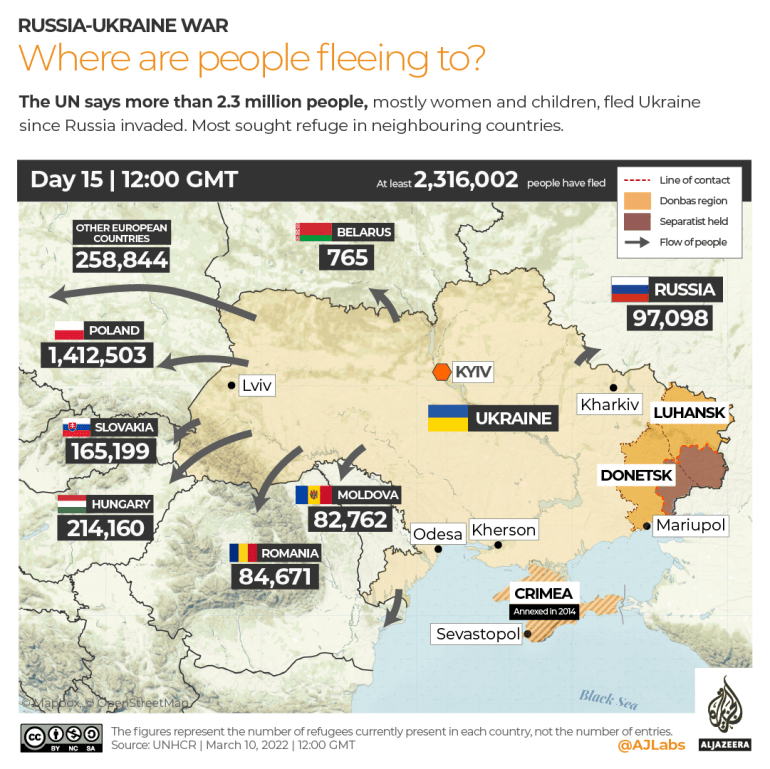 In Warsaw, Harris reiterated the US commitment to defend “every inch of NATO territory” under the alliance’s collective defense treatment. Poland joined NATO in 1991, but Ukraine is not a member of the US-led bloc.

The vice president’s visit to Poland comes as the Russian invasion of neighboring Ukraine enters its third week.

Talks between Russian Foreign Minister Sergey Lavrov and his Ukrainian counterpart Dmytro Kuleba in Turkey on Thursday failed to secure a ceasefire.

Russia launched an all-out invasion of Ukraine on February 24 after a months-long standoff that saw Moscow amass troops near the Ukrainian borders as it demanded an end to NATO expansion into former Soviet republics.

The US and its allies were quick to impose sweeping sanctions on the Russian economy as well as financial penalties on Russian President Vladimir Putin and elites in his inner circle.

The war has forced more than 2.3 million people to flee Ukraine, according to the United Nations, and devastated areas across the country. Major cities, including the capital Kyiv, have faced Russian bombing and siege.

On Thursday, Russia resumed its efforts to capture Mariupol, a day after Russian shelling hit a hospital in the besieged southeastern Ukrainian city, drawing widespread condemnation.

United Nations Secretary-General Antonio Guterres called the attack on the hospital “horrific”, urging an end to the “senseless violence”.

On Thursday, Poland’s Duda accused Russia of bombing civilians in Ukraine. “This is an act of barbarity bearing the features of a genocide; it aims at eliminating or destroying a nation, ”he said of the Russian invasion.

For her part, Harris voiced support for an international investigation into possible Russian war crimes in Ukraine. “Absolutely, there should be an investigation, and we should all be watching. And I have no question the eyes of the world are on this war and what Russia has done in terms of this aggression and these atrocities, ”she said.

Last week, the International Criminal Court (ICC) prosecutor announced the launch of an investigation into alleged abuses committed in the conflict. The US is not a party to the Rome Statute that established the Hague-based court, which investigates war crimes, genocide and crimes against humanity.

Under former President Donald Trump, US sanctions imposed on ICC officials for investigating alleged war crimes in Israel and the occupied Palestinian Territories, and Afghanistan.

The Biden administration revoked the sanctions, and since then, the court has omitted US forces from its Afghanistan probe. But the US remains vehemently opposed to international investigations into Israel’s policies.