More US companies seeking fresh capital are turning to private investments or looking for potential buyers as volatile stock markets stand in the way of going public.

Falling valuations and unpredictable market swings have led to a sharp drop in listings activity that experts think will take several months to bounce back, but private fundraisings are continuing at close to a record pace.

The benchmark S&P 500 stock index has fallen 5 per cent since the start of the year, with the sort of high-growth companies that dominate initial public offerings hit particularly hard. Stocks from almost all of the largest IPOs of 2021 have fallen dramatically from their early highs, with several including Rivian and Bumble tumbling more than 50 per cent.

Although markets have regained some of their losses over the past week, the extent of recent swings – the S&P has moved more than 1 per cent in either direction on a third of trading days this year – means few advisers expect a quick rebound in IPO volumes .

“Everything is on hold at the moment,” said Derek Dostal, a capital markets partner at law firm Davis Polk. “A traditional roadshow is one to two weeks – who wants to go on the road for two weeks when the market is all over the place?”

Just 13 companies have raised $ 2.1bn in US IPOs this year, according to data from Dealogic, down from almost $ 20bn in the same period at the beginning of 2021. Several deals have been postponed at short notice, and nine of the 13 that were completed did so at or below the bottom of their target price ranges. Just one company – the private equity firm TPG – has raised more than $ 250mn.

“The one thing [the IPO market] struggles with the most is the uncertainty that comes with volatility, ”said the head of equity capital markets at a large investment bank. “Generally, things are [being] pushed out to the second quarter. ”

Any company that fails to launch their IPO by next week will be required to provide complete annual results rather than figures for the first three quarters of 2021, presenting a further practical delay for companies that had planned to list in January.

The number of IPOs of special purpose acquisition companies has also dropped precipitously, with less than $ 6bn raised so far this year compared to $ 26bn in January 2021. Adam Fleisher, a partner at law firm Cleary Gottlieb, said “the Spac fad has clearly passed ”, with many companies that listed last year now struggling to find targets.

In contrast to the moribund IPO market, private US start-ups raised $ 27.5bn in funding in January, according to PitchBook data, up from $ 14.8bn one year earlier.

Cohesity, a Silicon Valley data management start-up that filed confidentially for an IPO last year, has recently discussed raising a significant round of private financing and delaying its listing, said two people briefed on the talks. The company, which investors valued at $ 3.7bn in March last year, declined to comment.

Companies that still wish to go public are also choosing to keep their options open with so-called “dual track” approaches, whereby they simultaneously prepare for an IPO and search for potential acquirers.

“It means you’re not dependent on any single path. The cost is you’ve got to pay attention to two all-consuming processes, ”Fleisher said. “That fell off a little bit last year because the IPO market was so hot, but now more people are picking that option back up.” 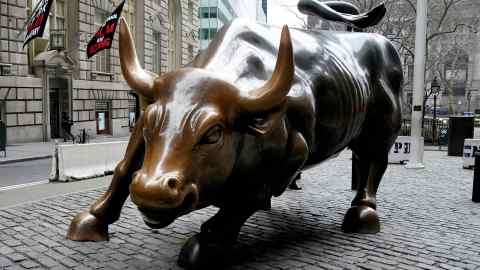 Several bankers and lawyers stressed that there was still a strong pipeline of companies interested in going public once markets calm down. British chipmaker Arm this week signaled hopes to list in New York, with incoming chief executive Rene Haas saying the timing of an IPO was “just right”.

However, Paul Taubman, head of boutique investment bank PJT Partners, cautioned that changing macroeconomic conditions could have a longer-term impact making it harder for companies to raise capital.

“You see it with the Nasdaq, the Spac transactions and start-ups,” Taubman said. “Many companies are under pressure.”