A fighter jet is not always a fighter jet. Sometimes it is only a plane.

“It depends on what the jet carries,” said a European defense official. “A plane is just a platform; it depends on whether it carries weapons or not. ”

The distinction is an important one that goes to the heart of the vast supplies of weapons that western countries are sending into Ukraine.

While NATO members are leading the effort, the transatlantic military alliance itself has played no role in shipments or co-ordination to avoid the risk of Moscow viewing it as an escalatory step that could expand the war following Russia’s invasion.

“It is a fine line to tread,” said one senior European official, who distinguished between offensive weapons, such as the fleet of MiG-29 fighter jets Poland had offered to Ukraine this week, and primarily defensive weapons such as anti-tank rockets. or air defense systems that western countries are supplying in the largest European arms supply push since the start of the cold war.

Many countries have openly advertised the equipment they are dispatching.

“Please do not spread the word that certain countries provide weapons to our country. Refrain from commenting on this, ”Oleksiy Reznikov, Ukraine’s defense minister, said on Wednesday. It was, he added, “a very delicate area that requires an extremely balanced approach to public comment. Especially during the war. ”

Even so, officials and analysts say Poland is already playing a central role as a supply hub, as are Slovakia and Romania. The main logistical challenge is to overcome border bottlenecks and deliver the supplies into the hands of the Ukrainian forces that need them.

“What we don’t want is for all the aid to go down one channel, because that puts it more at risk,” said a senior diplomat from a country sending both lethal and non-lethal aid. “If you look at the maps and the potential for chokepoints, that’s something we are going to have to watch.”

One night on a road in central Ukraine last week, the highway was closed so that army convoys including trucks could have priority. Ukrainian fighter jets flew overhead. 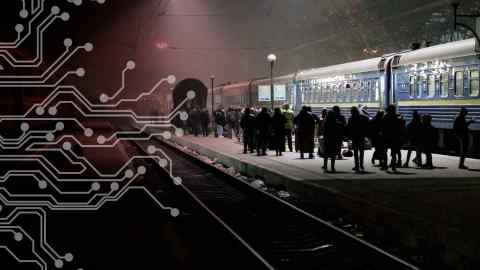 So far, there is little public evidence that Russian forces have intercepted supply convoys, although on Tuesday Jens Stoltenberg, NATO’s secretary-general, cautioned Russia that attacking allied supply lines would represent a dangerous escalation.

“The allies are helping Ukraine uphold their right for self-defense, which is enshrined in the UN Charter,” he said.

The US on Wednesday approved a $ 13.6bn spending package for Ukraine, with $ 6.5bn dedicated to defense spending. Adjusted for inflation, that is more than the landmark $ 400mn package the US provided Greece and Turkey in 1947 in a move that marked the start of US cold war policy in Europe and, two years later, the foundation of NATO.

The next logistical challenge is to distribute weapons and protective equipment to troops in the field, who typically have only 10 days of supplies. That Ukrainian soldiers may be unfamiliar with the mix of weapons, be they German anti-tank weapons systems or Finnish sniper rifles, can also render them useless.

“Typically, requests are for body armor, secure radios, helmets and night-vision [equipment]”Said Oleksandr Danylyuk, Ukraine’s former national security chief, who has joined the civilian territorial defense mission and shared with the Financial Times a screenshot of requests from one unit that included items ranging from drones to fleeces, boots and machine gun lubricant.

It is cold comfort that Ukraine’s Russian opponents are also suffering from over-extended supply lines, and lack of ammunition, medical supplies, regular warm food and sleep. They also “have to sit in [cold] trenches or in vehicles without the engines running because they are short of fuel, ”said one western defense adviser.

But the assault is less than three weeks old, Russia’s forces are regrouping and Ukraine’s need for supplies is only going to rise, officials and analysts say. The types of weapons they need will also change.

“If they can only be equipped with small arms, that won’t be enough,” the adviser said. “It also needs military expertise to train new soldiers and long-range weapons to counteract those [such as artillery] that Russia is using. ”

But to continue fighting, and to win, “we will need modern western fighter jets and attack helicopters”, he added.