An Australian court has overturned a ruling on a case brought by an 87-year-old nun that made the environment minister personally liable for future damages to children caused by climate change.

Legal experts warned that the ruling way climate litigation at risk after a federal court said the Australian government did not have a duty of care to protect children from the effects of global warming when approving coal mine expansions.

Sister Brigid Arthur, on behalf of eight high school students, had asked for an injunction on mining company Whitehaven Coal’s plan to construct an opencast coal mine in northern New South Wales.

The applicants had argued that permitting the mine to go ahead would breach the minister’s duty of care, given the established scientific link between fossil fuel combustion and global warming.

Last year, the court found that the environment minister had a “duty to take reasonable care” to protect Australian children “from carbon dioxide emissions into the Earth’s atmosphere”.

The decision was hailed as a landmark victory for the climate movement, prompting predictions it would act as a brake on fossil fuel expansion and spur more private litigation against governments and businesses.

But the Federal Court’s decision to overturn that ruling, reached by a panel of three judges on Tuesday, left the future of such litigation in doubt.

The judges said the case dealt with “core policy issues” that were “unsuitable in their nature and character for judicial determination”. They dismissed the argument that, in approving a coal mine, the minister was putting young Australians at the “foreseeable risk” of injury.

“It’s fair to say that we’re disappointed and the children are disappointed, but they will keep on fighting,” said David Barnden, principal at Equity Generation Lawyers, which represented the children and the Roman Catholic nun. He said the applicants would review the judgment and that the decision could be appealed in the High Court.

Anjali Sharma, 17, one of the students who brought the case, said she was “devastated” by the decision.

“Climate change is already wreaking havoc on the lives of Australians,” she said. “Two years ago, Australia was on fire; today, it’s under water. Burning coal makes bushfires and floods more catastrophic and more deadly. Something needs to change. Our leaders need to step up and act. ”

Jacqueline Peel, a professor of climate change law at the University of Melbourne, said the decision would put a “handbrake on climate litigation in Australia”.

“In Australia we’ve been seeing a trend of incrementally embracing a greater role for the courts in a context where the federal government has been lambasted nationally and internationally for lack of meaningful policy on climate change,” she said. 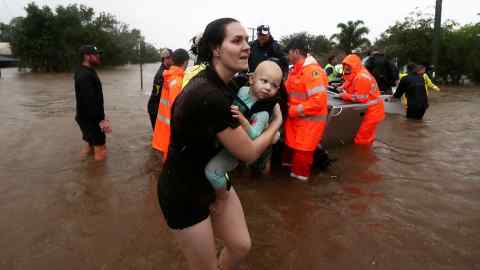 Australia has been criticized internationally for repealing an emissions trading scheme, undermining efforts to build international carbon trading rules, failing to update its 2030 emissions targets as required under the Paris climate agreement, and promoting the expansion of fossil fuels.

Peel added that the ruling “bucks the trend” internationally of successful climate litigation, adding that courts in Europe were becoming particularly “brave”.

The ruling was made a day after shareholder activist group ClientEarth announced it would start landmark legal proceedings against oil major Shell’s board of directors for their alleged failure to adopt a strategy that “truly aligns” with the 2015 Paris climate agreement.