A multimillion-pound mansion in central London owned by the family of sanctioned Russian oligarch Oleg Deripaska has been occupied by protesters who want to open its rooms to house Ukrainian refugees.

Squatters broke into the Belgravia mansion on Sunday night, hanging a Ukrainian flag and banner outside reading: “The property has been liberated.” In a statement, the group said: “Russian oligarchs: You occupy Ukraine, We Occupy You!”

They declared that the house at 5 Belgrave Square, which has its own cinema, “belongs to Ukrainian refugees” and that they would not be moved until Russia ended the war. The protesters are calling themselves the London Makhnovists after Nestor Makhno, a 20th-century Ukrainian anarchist.

The move gives the protesters an unlikely common ground with leveling-up secretary Michael Gove, who has said he wants to seize luxury mansions from Russian oligarchs to house Ukrainians.

He told the BBC’s Sunday Morning program that he wanted “to explore an option which would allow us to use the homes and properties of sanctioned individuals for humanitarian and other purposes”.

Protesters at the stucco-fronted house said on Monday: “Priti Patel, do not worry. We did your job. Refugees welcome. ” Patel, the home secretary, has come in for criticism over her handling of the Ukrainian refugee crisis.

The Metropolitan Police said they were called to the house “shortly after 01:00 hrs on Monday”.

Officers in riot gear charged the front door at lunchtime, after which a Met spokesperson said: “Officers have completed a search of the property in Belgrave Square and are satisfied there are no protesters inside. We continue to engage with those on the balcony as we balance the need for enforcement with the safety of all involved. ”

The property was marketed for £ 25mn in 2003 before being bought for members of the Deripaska family. It became a symbol not just of the flood of Russian money into London at the time but also the ways that ownership of buildings can be secured through overseas companies. 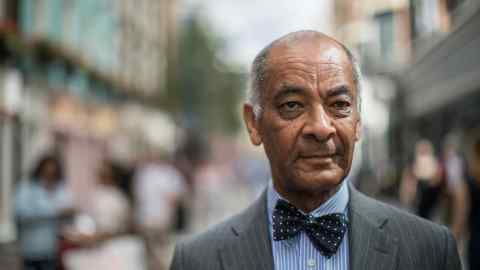 The title register for the property describes the owner of the house as Ravellot Limited, a company registered in the British Virgin Islands, but a spokesperson for the oligarch told the FT last month that members of Deripaksa’s family owned the house.

She added that Deripaska was not the beneficial owner – despite the findings of a 2006 High Court judgment in London.

Deripaska, who founded metals group EN +, has been under US sanctions since 2018 over an allegedly close relationship with the Kremlin, although he said in 2019 that these were “filthy lies”.

The UK government imposed sanctions on Deripaksa last week. The announcement described him as a “pro-Kremlin oligarch” that was “closely associated with the government of Russia and Vladimir Putin.”

The EN + Group floated on the London Stock Exchange in 2017, chaired by former Minister and Peer Lord Gregory Barker, who resigned from the group last week after its shares were suspended and sanctions imposed on Deripaska.

A spokesperson for Deripaska told the FT last month that his assets were acquired “legitimately and lawfully” and “allegations to the contrary were utterly baseless”.

She said that before stepping down from the management of EN +, he met many senior officials from the Kremlin and relevant Russian government departments. “He had ordinary links, just like any other industrialist of his scale would have in any country around the world,” she added.