Members of the Sackler family who own Purdue Pharma have agreed to increase their financial contribution to a settlement with US states over their role in the opioid crisis to $ 6bn.

It follows a decision by a group of US states to drop their opposition to provisions in a deal to resolve Purdue bankruptcy’s that would protect the family from current and future civil lawsuits over the US opioid crisis.

Under the draft agreement, which was published by a court-appointed mediator on Thursday, the family members issued a statement of regret over the role that OxyContin – a highly addictive painkiller made by Purdue – played in fuelling an opioid crisis that has killed more than 500,000 Americans.

The Sackler family members have also agreed to a clause that allows any US institutions or organizations to remove their names from buildings, scholarships or endowments that they have sponsored, accelerating a process that has already fled amid public outrage over the opioid crisis’s death toll.

The revised settlement would still grant the Sackler family protection from all current and future civil liability claims that could threaten their remaining fortunes. They would not be protected from criminal prosecution, although there is no indication that any charges are pending.

In December an US federal court judge threw out a previous settlement worth at least $ 4.5bn following a legal appeal by a group of eight US states and the US attorney for the southern district of New York. The states argued the Sackler family owners were benefiting from the liability releases without having personally filed for Chapter 11 protection themselves.

Lawyers for Purdue warned that without such a settlement, years of litigation would delay payments to victims and shrink the available pot.

The objectors pointed to the analysis presented in the bankruptcy court that showed the Sackler family members had taken more than $ 10bn out of Perdue between 2008 and 2017. As a requirement for the Sacklers’ contribution to the original agreement, the family members had demanded that they could no longer be pursued for liability.

The new agreement must be approved by Judge Robert Drain, who is overseeing the Purdue bankruptcy.

Carl Tobias, a law professor at the University of Richmond, said the settlement could mark the end of the long-running Purdue Pharma bankruptcy. But this would depend on approval by Judge Drain and whether the US bankruptcy trustee, and the Department of Justice, which helped persuade the US federal court to throw out the original bankruptcy deal, are satisfied, he said. 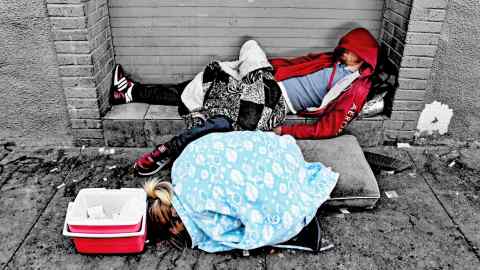 In compliance with the new settlement the families of the late Dr Mortimer Sackler and the late Dr Raymond Sackler issued a statement on Thursday, expressing regret for the role that OxyContin played in the opioid crisis. The statement reiterated they did not break any laws and emphasized that it was not an admission of wrongdoing.

“The families have consistently affirmed that settlement is by far the best way to help solve a serious and complex public health crisis. While the families have acted lawfully in all respects, they sincerely regret that OxyContin, a prescription medicine that continues to help people suffering from chronic pain, unexpectedly became part of an opioid crisis that has brought grief and loss to far too many families and communities, ”The statement read.

The mediator recommended the bankruptcy court hold a virtual hearing to allow victims of the opioid crisis to tell their personal stories. At least one member from the two sides of the Sackler family who own Purdue should attend, the mediator said.