Rishi Sunak called his £ 9bn plan to soften the blow of soaring domestic energy prices “fair, targeted and proportionate”, but others called it “woefully inadequate”.

For the UK chancellor – and his boss Boris Johnson – the big question is whether he has done enough to take the edge off an economic crisis which could be politically explosive in the spring.

Sunak said his initiative would “take the sting out of a significant price shock”, but households across Britain will still face a hefty increase to their living costs in April, as higher energy bills and the chancellor’s planned tax rises hit.

“It sounds comprehensive without actually costing very much,” said one former cabinet minister. Voters coming to terms with their newly straited circumstances will cast their verdict on the government’s economic record in a crucial round of local elections on May 5.

The polls are widely seen by Tory MPs as a referendum on Johnson’s premiership; if voters are angry about the cost of living crisis and are looking for someone to blame, the prime minister is a likely candidate.

Sunak’s “energy bills rebate”, announced in the House of Commons on Thursday, is therefore a crucial element in the survival plan of a prime minister that he might, eventually, seek to replace.

The £ 693 rise in the energy price cap – in April the energy regulator Ofgem will raise it to an average of £ 1,971 – will come as inflation is heading towards 7 per cent and Sunak’s tax rises kick in. 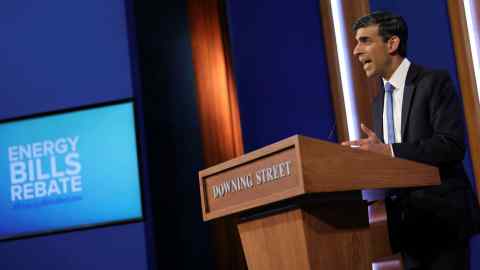 The Resolution Foundation think-tank has calculated that a national insurance increase to fund the NHS and social care and a freeze to income tax thresholds will cost the average household £ 600.

Higher taxes and energy costs will together, therefore, leave a typical household almost £ 1,300 worse off from April. Some Tory MPs on Thursday again urged Sunak to reverse the NI rise. “It’s a moment of maximum political danger,” admitted one.

The construction of Sunak’s relief package was highly political. The first part – a £ 200 rebate for all households – aims to defer some of the economic and political pain of the gas price spike at minimal cost.

Labor called it a “buy now, pay later” scheme. The £ 5.5bn rebate is essentially a loan to householders, who will be expected to pay back the £ 40 a year through a levy on their energy bills for the next five years.

The “universal” element of the package is easy to explain to voters, but Labor highlighted the fact it would not be paid until October, when it might be swallowed up by another increase in the energy price cap.

Energy companies are particularly concerned about October, when the cap is next scheduled to change. Analysts expect a further increase of up to nearly £ 2,450 per household.

In that scenario, Sunak would be under pressure to come up with more help for households. The chancellor, at a Downing Street press conference, did not rule out another intervention in the autumn, even though he warned MPs: “It is not sustainable to keep holding the price of energy artificially low.”

The second part of the package, costing £ 3.6bn, is a one-off £ 150 “targeted” rebate on council tax bills for properties in England in council tax bands AD, covering 80 per cent of homes.

The Resolution Foundation said Sunak should have used the benefits system to help poor households, but the chancellor made no apology for helping “struggling” middle earners as well as those on benefits.

According to his allies, these might typically include a couple where one earner was a nurse or teacher and the other was on minimum wage – precisely the kind of swing voters who will decide the next election.

Although Sunak’s plan sounded like a major intervention, the first part simply spreads the pain of higher energy bills over a number of years; the £ 3.6bn element will take £ 150 off bills that will rise about £ 700 in April and possibly by more in October.

Adam Scorer, chief executive of fuel poverty charity National Energy Action, said the chancellor’s measures were “woefully inadequate and will leave those on the lowest incomes and in the least efficient homes in deep peril.”

Dame Clare Moriarty, chief executive of the charity Citizens Advice, said: “Today’s price cap rise means we’ll all see our energy bills rocket in April.” She added: “If the government is serious about helping families facing the desperate choice between heating and eating it should use the benefits system.”

Sunak’s allies say the chancellor is determined to hold down spending and additional borrowing; the Bank of England’s decision on Thursday to raise rates from 0.25 per cent to 0.5 per cent was a reminder of the threat of rising borrowing costs to the exchequer.

The Treasury claims that a 1 percentage point rise in inflation and interest rates could increase debt servicing costs by £ 25bn.

Sunak acknowledged there was only a limited amount he could do to keep prices low in the face of global inflationary pressures and spiraling energy prices. “For me to stand here and pretend we don’t have to adjust to paying higher prices would be wrong and dishonest,” he said.

Another reason the chancellor wants to contain excessive spending and raise taxes has now been made clear in his last Budget: “By the end of this parliament, I want taxes to be going down not up,” he said.

Reducing taxes and other handouts to voters usually deliver higher political dividends closer to the date of a general election. But for Johnson, anxiously eyeing local elections, a lot is resting on how voters respond to Sunak’s energy package in the coming weeks.