New Delhi, India–India has held its nose and abstained five times since the February 24 invasion of Ukraine by Russia. While none of these abstentions has affected the outcome of the vote, they were driven by the South Asian country need to secure its supply of defense equipment, the majority of which it gets from Russia, experts say.

India’s reliance on Russian military and strategic equipment is “huge”, said retired Lieutenant General Deependra Singh Hooda, former commander of India’s northern army. “I mean, 60-70 percent of the equipment is Russian,” he said, listing air force fighters and air defense systems, army’s armor and the navy’s aircraft carrier and frigates. Notably, “who else will lease a nuclear submarine to you?” he asks.

Apart from that, there are currently four warships on order from Russia (two of which are to be built in the Indian coastal state of Goa), and New Delhi also has plans to acquire the Igla air defense system and 200 utility helicopters.

Although over the past few years, India has been working on diversifying its sources of military equipment, this dependence cannot be easily or quickly substituted. “It’s just not possible to suddenly replace 60-70 percent of your equipment,” Lt-Gen Hooda told Al Jazeera.

That said, this dependence on Russian equipment is expected to become more difficult to manage because of the slew of sanctions on that country.

Laxman Behera, an expert on India’s defense acquisitions and an associate professor at Jawaharlal Nehru University’s (JNU) Special Center for National Security Studies thinks India will face difficulties paying for its Russian kit and will have to find an “alternate mechanism” to make those payments .

While India has made rupee-ruble payments in similar cases earlier, the cumulative effect of sanctions on Russian banks, their severance from the SWIFT system and the “continuous fall of the ruble”, might even require India to resort to less preferred barter deals if the exchange rate is not “acceptable to both,” Behera says. “We buy their equipment and we sell them agricultural products,” he adds, citing an example of a potential exchange. 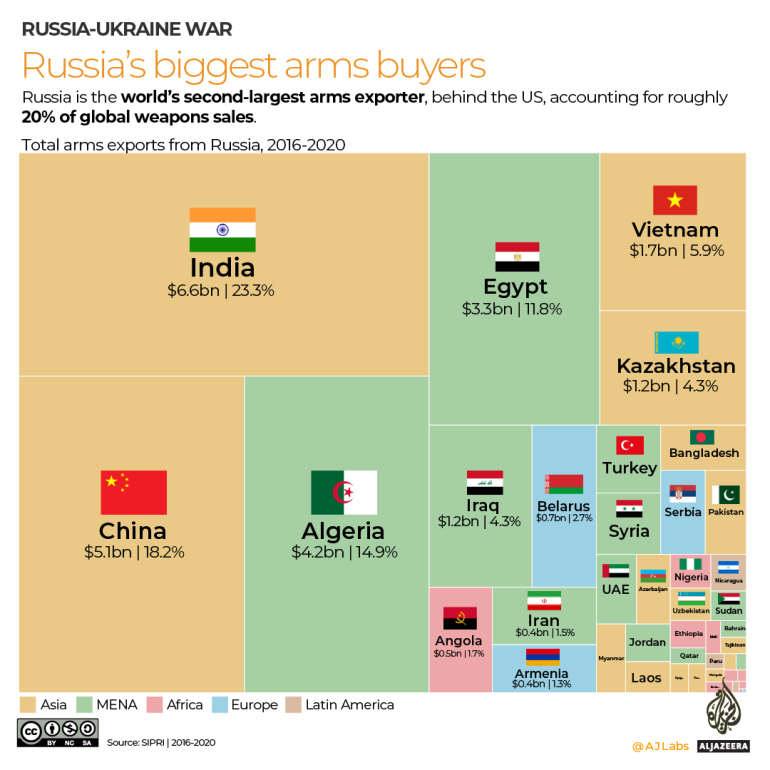 Happymon Jacob, founder of the Council for Strategic and Defense Research in New Delhi and a professor at JNU says that although there are not any “specific asks” of India from the United States and its allies on India’s defense cooperation with Russia, yet, “ When those ask come, there will be a focus on the nitty-gritties of the India-Russia defense relationship. I think that’s when India will have to take tough decisions ”including examining all of its Russian deals to see which ones it can pare back.

But there is also a second rationale, no less important. Russia has diplomatic heft with India’s northern neighbor that none of India’s Quad partners can exercise. The first talks between India and China after soldiers of the two nuclear-armed countries got into a skirmish in June 2020 in the border area of ​​Galwan were held in Moscow. “Russia carries more weight with China than, for example, the US,” said Lt-Gen Hood.

That physical melee resulted in the deaths of 20 Indian personnel and an indeterminate number of Chinese PLA members. Tensions between the two countries continue to this day and both sides have enhanced military postures against each other, another reason why India cannot afford to let Russia become completely aligned with China, says Lt-Gen Hood. “India’s stance is not new,” he adds, “and to expect India to suddenly switch its stance is also impractical.”

But India’s abstentions on the global stage have left it with a perceived pro-Russia tilt, an image it has since tried to offset with explanatory notes urging respect for sovereignty, an end to the violence and a return to diplomacy.

Successive such notes have shown greater “disapproval” and a “harsher tone” towards Russia, according to Jacob.

While India’s neutrality provides important comfort for increasingly isolated Russia, abstentions are causing problems for it in other quarters and have evoked “extreme dissatisfaction”, as one member of the US Senate Committee on Foreign Relations said last week during a hearing.

If the conflict is prolonged, “there is going to be a time where Indians will be asked to choose,” says Jacob. India’s current “comfort zone”, he says, “will no more exist” and it will be “nudged to start taking stronger positions” against “Russian aggression”.

But New Delhi can actually use its recent stance to its advantage, experts say.

India remains one of the few countries in the world that can talk to both sides in the conflict. The Western powers should actually look at utilizing India’s relationship with Russia because it’s seen as a partner that is “acceptable”, points out Lt-Gen Hood, adding, “If there is a desire [for mediation] on both sides at some stage, then I think that, yes, India could play a role. ”

Jacob agrees. “India is seen as an honest broker by the Russians, by the Ukrainians, by the Americans, so India is actually well placed to play the role of a mediator,” he says.

One way for India out of perceived inaction could be to volunteer its services to bring both sides to the negotiating table.

Jacob discounts worries in New Delhi of being blamed “if things go south” as being “too risk-averse”. He also dismisses counterarguments in India that such intervention by New Delhi could open the door to calls for mediation on the Kashmir issue, referring to India’s historical stance against third-party mediation with Pakistan over their claims on that territory. “No. It’s chalk and cheese because in the Kashmir conflict, India doesn’t want third-party mediation. But in this particular case, India would only mediate if both Russians and Ukrainians want India to do so. So it would be by invitation, ”he says.

More important than those concerns is the fact that there is a “tactical advantage” in being a mediator here, says Jacob, and New Delhi could use that role to explain why it’s abstaining from voting. “You can say ‘a mediator has to be neutral, so I’m trying to be neutral in this,'” Jacob says. “So all you need to do is to start the negotiations, send a special envoy to these capitals and then abstain from everything. That would be justified, ”he says, adding,“ Sitting back and hoping that things will turn out OK, cannot be a national security strategy. Hope is not a national security strategy. ”