Great Britain’s best hopes of medal success at the Beijing Olympics have been left to its curling team, after the country’s athletes struggled to make their mark at the Games despite millions of pounds of investment to support winter sports.

Team GB is guaranteed to salvage at least one medal in the men’s curling final on Saturday but has failed to get on to the podium in any other events. Its standing is a far cry from the five medals won in Sochi in 2014 and at Pyeongchang four years later, despite spending commitments of more than £ 20mn from 2019 to 2023 in nine winter sport categories.

The performance contrasts with the team’s success at the Summer Olympics in Tokyo last year, where Great Britain finished fourth in the medals table with 22 gold medals and 65 medals overall. The haul, just shy of its record in Rio de Janeiro four years earlier, was seen as a consequence of years of investment.

In the women’s skeleton, an event in which the UK team has won gold at every Olympics since the 2010 Vancouver Games, Laura Deas finished 19th after winning bronze in 2018. “Obviously the speed that I so desperately want is not there,” she said. after her fourth heat.

Dave Ryding, the UK’s flag-bearer, became the first British athlete to win a gold medal at an Alpine skiing World Cup event last month but finished in 13th place in the men’s slalom on Wednesday.

“It just felt more like a struggle than a flow today,” he told reporters at the National Alpine Ski Center in Yanqing.

In curling, a sport that dates back to 16th-century Scotland, the men’s team, led by Bruce Mouat, face world champions Sweden on Saturday. The women’s team compete in the semi-finals this evening.

Gus Kenworthy, who previously represented the US and won a silver medal in Sochi, is in the final of the freeski halfpipe on Saturday.

Michael Payne, a former marketing and broadcast rights director at the IOC who skied for the UK in the 1970s, defended the performance saying, “There’s a lot more chance in play, particularly the Alpine freestyle.” 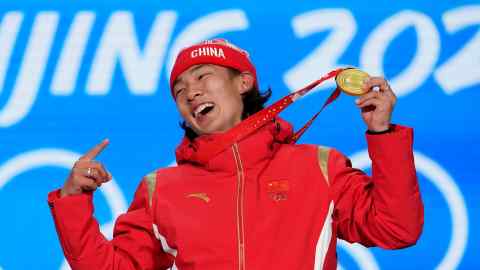 The struggles of Team GB contrast with a better than expected performance from China, which is fourth in the medal table and has won eight golds. The success of US-born skier Eileen Gu, who won her second gold medal on Friday, and snowboarding star Su Yiming has ignited the popularity of the Games in the host country.

China aims to entice 300mn people to participate in winter sports on the back of hosting the event, which has operated within a so-called “closed loop” to avoid any transmission of the coronavirus to the wider population.

Despite his Olympics disappointment, Ryding, who began skiing on a dry ski slope in Lancashire, suggested there was hope to be taken from his World Cup gold in Austria last month.

“I was trying so hard to get that win, it just felt like I was smashing my head against a brick wall,” he said. “For it to finally happen, I think it shows the next generation that it’s do-able and hopefully it makes it easier.”