Tesco will ax more than 1,000 roles as it looks to redeploy staff and reduce expensive night work, the latest large retailer to seek to contain rapidly rising labor costs.

The UK’s largest supermarket chain said it would move stock replenishment activity from night-time to daytime at about 36 of its larger stores and 49 convenience stores. Petrol stations will also move to unstaffed operation at another 36 sites.

Jason Tarry, chief executive for the UK and Ireland, said Tesco was “always looking at how we can run our business as simply and efficiently as possible” and that the changes reflected the way people were shopping.

The changes will put 1,600 roles at risk of redundancy but the company said it had about 3,000 vacancies and would seek to redeploy those affected.

The numbers of people and stores affected are relatively small in the context of the group’s UK operations, which comprise more than 2,000 stores and 300,000 staff.

However, they underline the pressure on retailers to mitigate the impact of rising wage costs by finding savings elsewhere. Supermarket groups employ large numbers of people in hourly-paid roles and are heavily exposed to the impact of minimum wage legislation and the tightness of the labor market.

The UK’s statutory minimum wage will rise 6.6 per cent to £ 9.50 per hour in April, the same month as a 1.25 percentage point rise in employer national insurance contributions is set to come into effect.

But wages at many supermarkets have already risen above that level, with Wm Morrison, Aldi, Lidl and J Sainsbury all paying or committing to pay £ 10 per hour or more. Waitrose has pledged to pay the real living wage, at present £ 9.90 per hour, once annual profits at the John Lewis Partnership exceed £ 200mn

Tesco will agree a new hourly rate for store staff in the spring, following talks with shop workers’ union Usdaw. However, under its current pay structure, night-time workers receive a £ 2.30 per hour premium, meaning they are paid a fifth more than their daytime colleagues.

Wage pressure is even more acute in the supply chain, with retailers having to increase lorry drivers’ wages and pay retention bonuses in response to a Europe-wide shortfall of drivers. 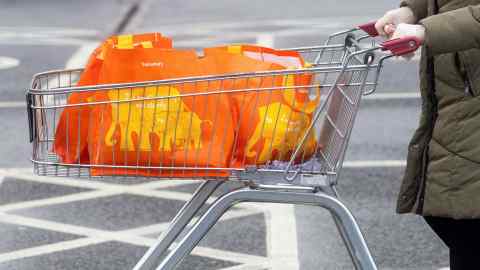 Tesco last year agreed wage increases of more than 5 per cent for workers in its distribution centers to head off the prospect of strike action in the run-up to Christmas.

The group said on Monday it would close in-store meat, fish and hot deli counters, having already shut cold delicatessen counters in 2019. However, it expects to redeploy affected staff within the same stores.

Rival Sainsbury’s, the UK’s second-largest supermarket, closed its fresh counters in late 2020 and early 2021. A long-term trend of declining patronage accelerated during the pandemic, as shoppers tended to regard pre-packaged food as safer than goods on open display . Counters also generate higher levels of food waste.

Tesco scrapped Metro stores, a “mini supermarket” format, in 2019. It converted most of the stores to its Express convenience format, which requires fewer staff to operate and charges higher prices.

On Monday, it said it would also discontinue Jack’s, the discount store format introduced by former chief executive Dave Lewis in 2018. It said the lessons learned from operating Jack’s, which was modeled on discounters Aldi and Lidl, would be incorporated into Tesco.