The British government has moved closer to taking a stake in nuclear power generation for the first time in more than a decade after making an initial £ 100m investment in the planned Sizewell C power station in Suffolk.

The funding announced on Thursday is part of attempts by ministers to accelerate the project – led by France’s EDF Energy with China’s CGN as a minority partner – which has been plagued by delays as successfulive governments have struggled to find a funding model that would attract private finance .

The government said the £ 100m would help bring the Sizewell project to maturity and attract other external investors. It would work like a convertible loan, which would trigger once Sizewell C reaches its final investment decision, expected in three years’ time.

At that point, the government would either take a stake in the project or be repaid. After that, if EDF failed to deliver the scheme the government would take control of the subsidiary set up to build the power station and the site on the Suffolk coast designated for the plant.

Simone Rossi, chief executive of EDF Energy, welcomed the investment, which he said together with the French company’s own funding would “allow us to continue to move the project towards a financial investment decision”.

The British government has not had any involvement in nuclear power generation since it sold its 36 per cent stake in British Energy – which owned eight UK nuclear plants – to EDF in 2009.

The investment comes as ministers continued to grapple with a growing cost of living crisis, including soaring energy bills caused by record gas prices. These pressures have further galvanized efforts to kick-start the development of more low carbon electricity generation.

Boris Johnson, the prime minister, has committed to making nuclear energy a key part in reaching the UK’s climate target of reaching net zero emissions by 2050. 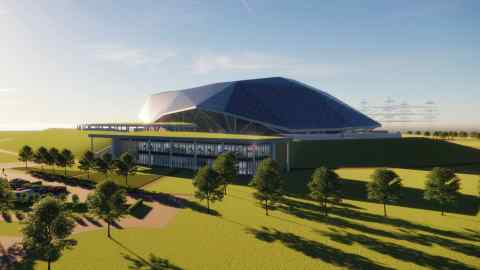 Despite commitments by successful governments over the past decade to build a new generation of atomic power stations, most of the projects have collapsed as the private sector was unwilling to fund them.

The government first suggested in 2018 that it was prepared to take stakes in new nuclear power stations.

Most of the UK’s existing fleet of aging reactors, which supply 16 per cent of the country’s power, are being retired this decade, with the last one set to close in 2035.

The government said the £ 100m in funding was separate from the £ 1.7bn it allocated to Sizewell C in October to help get the project to a final investment decision. It added the larger allocation was subject to future negotiations with EDF.

In the longer term, the UK plans to use a funding model, known as the regulated asset base model, to pay for the construction of the project. This would add a levy to household energy bills to cover the construction costs of the plant.

The government hopes that its financial involvement in Sizewell C will help encourage outside investors to provide additional funding as it looks to oust CGN from the project, as part of a wider push against Chinese involvement in key UK infrastructure.

In a statement, the government said no decision had yet been made about the “final configuration” of investors in the project.

Alison Downes, from the Stop Sizewell C protest group, said the statement was notably silent on CGN. “The elephant in the room is still China – this announcement does not mention CGN or appear to do anything to remove them,” she said.